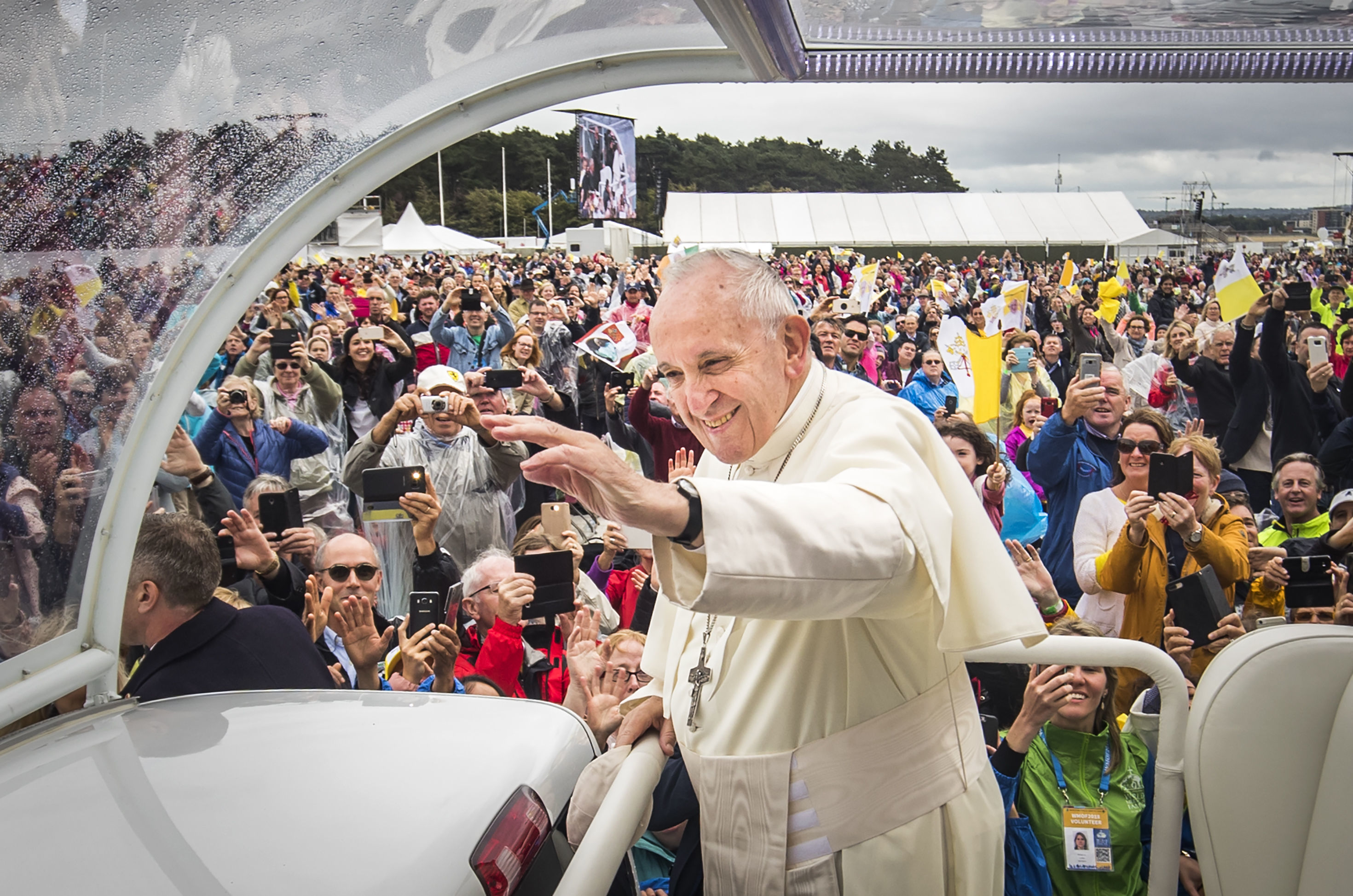 Pope offers alms amid his see of troubles 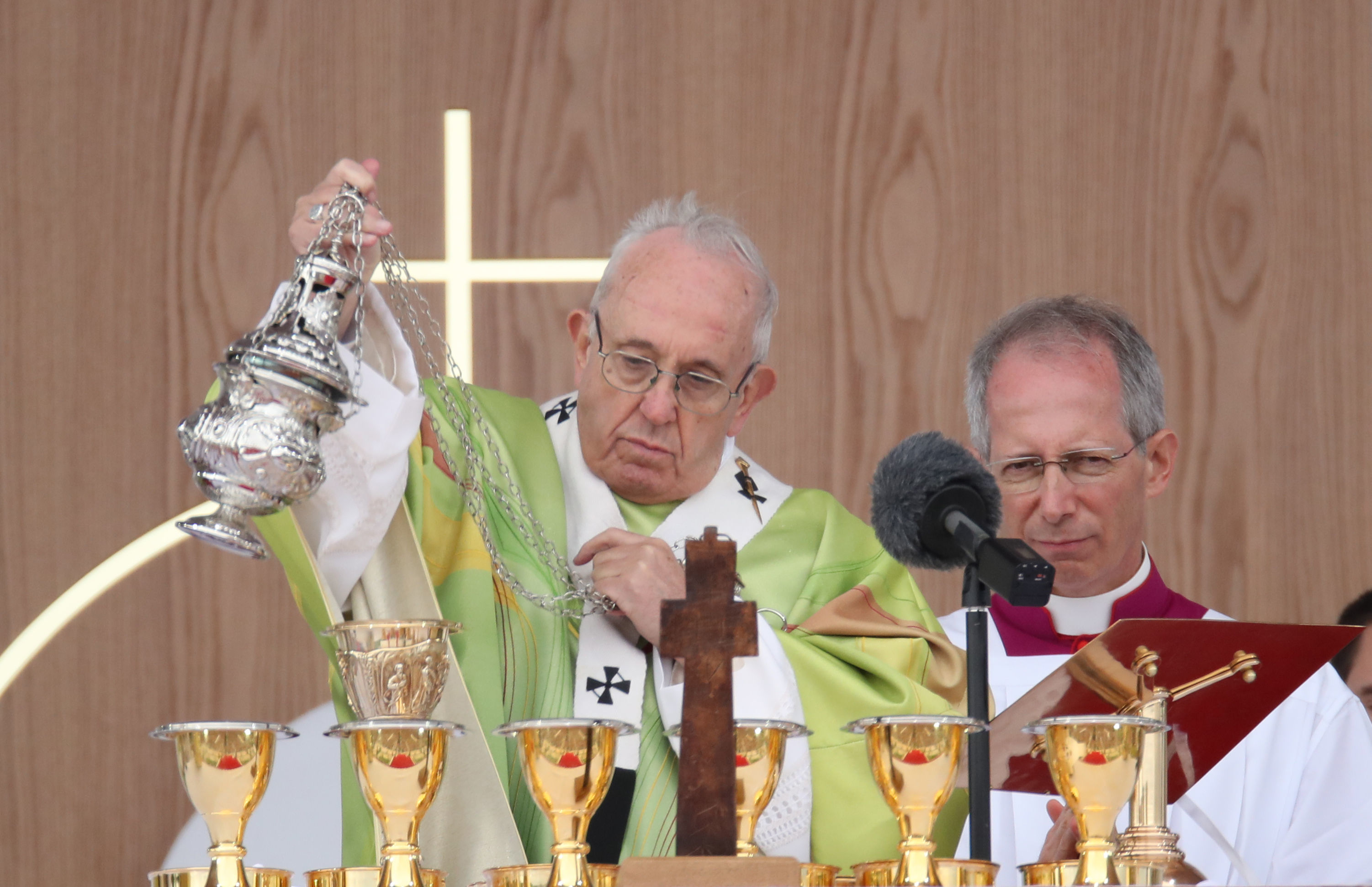 At the close of his historic two-day visit to Ireland, Pope Francis said a recurrent theme had been the Church’s need to acknowledge and remedy with honesty and courage past failures in the protection of children and vulnerable adults.

In his private meeting with the Irish bishops before flying back to Rome, the Pontiff admitted that the Church in recent years had had its eyes opened to the gravity and extent of sexual abuse.

And after protests appeared on Twitter and other social media, the Vatican has amended remarks made by Pope Francis to journalists on his flight home to Italy from Ireland about the parents of gay children and whether they should seek psychiatric help.

In the original transcript of his remarks, Pope Francis is reported as having said: "There have always been homosexuals, people with homosexual tendencies. Always. Sociologists say, I don’t know if it’s true, that in times of epochal changes, some social, ethical phenomena increase; one of them would be this. This is an opinion of some sociologists. Your question is clear: what would I say to a father who sees that his son or daughter has that tendency? I would say first to pray, pray! Don’t condemn. Dialogue, understand, make space for son and the daughter. Make space so they can express themselves.

"Then, at what age does this restlessness of the child express itself? It’s important. One thing is when it shows itself in a child. There are many things to do with psychiatry, to see how things are. Another thing is when it manifests itself after 20 years of age… But I’ll never say that silence is a remedy. To ignore a son or daughter with homosexual tendencies is a lack of paternity and maternity. You are my son, you are my daughter as you are! I’m your father, mother. Let’s talk! And if you, father and mother aren’t up to it, ask for help, but always in dialogue because that son and that daughter have the right to a family and that family of not being chased out of the family. This is a serious challenge, but that makes paternity and maternity."

In the official version of the press conference posted by the Vatican, the remarks about psychiatry have been removed.

In Ireland, Pope Francis came face to face with survivors, government representatives, and members of the faithful willing to challenge the institutional Church about this “painful chapter of her history”. In his own address at Dublin Castle, the Pope referred to these “repellent” crimes.

The Pennsylvania Grand Jury’s Report put the issue of clerical sexual abuse centre stage at the week-long World Meeting of Families in Dublin, re-opening wounds for survivors, re-opening the faithful’s sense of betrayal and anger and putting strain on church-state relations.

Revelations about the harsh and abusive regimes operated in Magdalene laundries, mother and baby homes and residential institutions operated by Catholic religious is a raw wound and many Catholics stayed away from events at the RDS and the papal Mass in the Phoenix Park in protest. The crowd of fewer than 200,000 who showed up to the park was smaller than the expected half million, and this was not just down to the inclement weather.

Following his meeting with eight survivors of clerical abuse, residential institutional abuse and mother and baby homes for an hour and a half at the papal nunciature in Dublin on Saturday, including Marie Collins and two priests, Fr Joe McDonald and Fr Patrick McCafferty, Pope Francis himself personally scripted prayers beseeching forgiveness which he said at the opening of the papal Mass on Sunday.

Praying in Spanish, he implored forgiveness for those members of the church’s hierarchy who “did not take charge of these painful situations” but rather “kept quiet” about them.

He asked for pardon for all the abuses committed in various types of institutions run by male or female religious and by others member of the Church.

In a reference to Magdalene Laundries and residential institutions, he begged forgiveness for those cases of exploitation through manual work that so many young women and men were subjected to.

He also implored forgiveness for the times in which many single mothers were told that to seek their children, who had been separated from them at birth was a mortal sin, and whose sons and daughters were told the same about seeking their birth mothers.

Referring to these crimes, he prayed for forgiveness “for the times in the Church when we did not show survivors of whatever kind of abuse compassion. The seeking of justice needs concrete actions.”

Though the issue of abuse dominated the papal visit, Pope Francis’ willingness to apologise sincerely brought some succour, and so there were also moments of magic during the two days.

In Dublin’s Pro Cathedral, the Pope met newly-weds and engaged couples and talked to them with honesty and wit about making time for each other, bringing up their children and listening to the wisdom of the elderly.

Engaged couple Cathal Barry, 28, and Christina Foley, 32, (pictured above) will marry this Saturday in St John the Baptist Church in Clontarf in Dublin, which is Christina’s home parish and the church where Cathal’s parents got married in 30 years ago to the very month.

According to Christina, the Pope was practical in his advice and warned the 750 couples from Ireland’s 26 dioceses of the importance of not letting the sun go down on their rows. “He told us not to go bed on a row but to end the conflict before bedtime so as not to wake up the next day in the middle of a cold war!”

Cathal said: “He speaks a lot about the whole culture of the temporary and the throwaway culture. He said he was amazed looking down and seeing so many young faces and he thanked everyone for committing themselves to marriage because in this throwaway culture the permanency of marriage was something quite radical.”

Before an enthusiastic crowd of over 75,000 in Croke Park stadium on Saturday night, Pope Francis told the assembled families that they are the “hope of the Church and the world”.

He said he liked to speak of the saints "next door" – those people who express God’s love in little acts of kindness in their daily routine. The vocation to love and holiness was not, he stressed, something reserved to the privileged few but was also for all those families that offer love, forgiveness and mercy when they see the need, and do so quietly, without great fanfare.

With his trademark humour, the Pontiff compared interfamilial relations to making a good cup of tea. “No one said it would be easy. It is like making tea: it is easy to bring the water to a boil, but a good cup of tea takes time and patience; it needs to brew!”

The highlight of the festival was a performance of Schubert’s Ave Maria by Italian tenor, Andrea Bocelli in a duet with Irish soprano Celine Byrne, with performances by the High Hopes choir, Daniel O’Donnell and Riverdance.

There were also a number of testimonies from families speaking about their personal journeys. One of the most poignant was that of the Iraqi family of Fr Ragheed Ganni who was murdered by Islamic extremists in Mosul in 2007.

In Knock, before an enthusiastic crowd of 45,000 which braved the elements on Sunday morning, the Pontiff once again apologised to those young people who suffered abuse. Knock is in the archdiocese of Tuam, where the notorious mother and baby home run by the Bon Secours Sistersis located.

Flanked by Archbishop Michael Neary of Tuam and Fr Richard Gibbons, Rector of Knock, the Pope said: “This open wound challenges us to be firm and decisive in the pursuit of truth and justice. I beg the Lord’s forgiveness for these sins and for the scandal and betrayal felt by so many others in God’s family.”

The Pope also prayed for peace in Northern Ireland. “My pilgrimage to Knock also allows me to address  a warm greeting to the beloved people of Northern Ireland. Although my journey for the World Meeting of Families does not include a visit to the North, I assure you of my affection and my closeness in prayer.”

He prayed that Our Lady, patroness of Knock, would sustain all the members of the Irish family to persevere in the work of reconciliation.