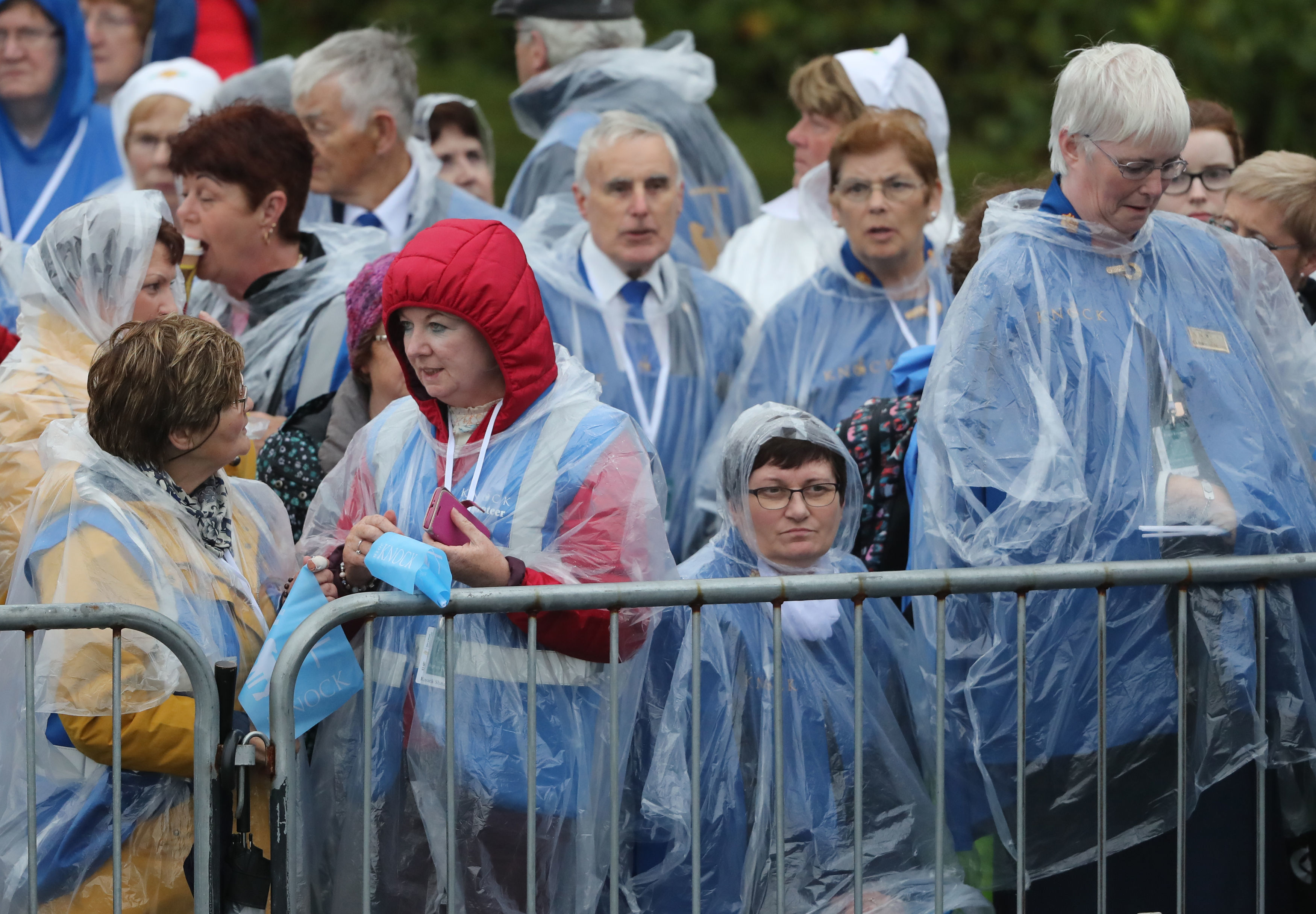 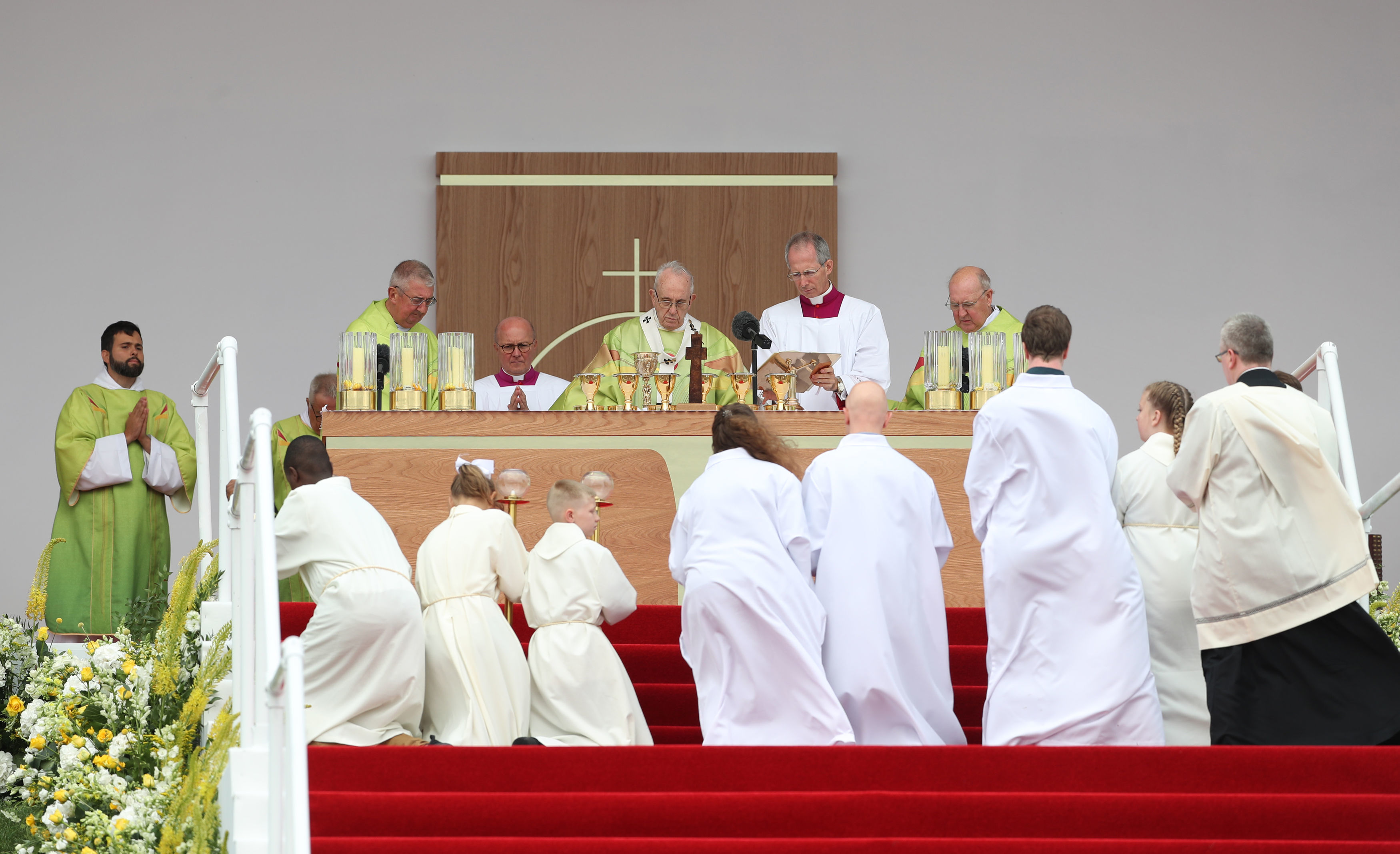 Pope Francis attends the closing Mass at the World Meeting of Families at Phoenix Park in Dublin, as part of his visit to Ireland.
Photo: Danny Lawson/PA Wire/PA Images

Pope Francis made a fulsome apology for clerical sex abuse and its cover-up by bishops at the beginning of a Mass in Phoenix Park on the second and final day of his Ireland trip.

In front of an estimated crowd of 300,000 in Phoenix Park, Francis used the penitential rite of the liturgy to make an heartfelt appeal for forgiveness, including for bishops who mishandled cases and for Church run homes which separated children from their parents and forced single mothers and children into slave labour.

“I would like to put these crimes before the mercy of the Lord and ask forgiveness for them,” the Pope said, speaking in Spanish .

“We apologise for abuses in Ireland, abuses of power and conscience, sexual abuse by qualified members of the Church.”

He went on: “We ask forgiveness for some members of the hierarchy who did not take care of these painful situations and kept silent” the Pope said before repeating: “We ask for forgiveness.”

The Pope’s apology came on the final day of his trip to Ireland, a visit that has been dominated by the clerical sexual abuse scandal. Last night a former papal ambassador to Washington released an 11-page testimony alleging he told the Pope about sexual misconduct allegations against Archbishop – former cardinal – Theodore McCarrick.

He went on: “in a special way, we apologise for all the abuses committed in various types of institutions led by religious men and women and other members of the Church and we apologise for the cases of labor exploitation to which so many minors were subjected.”

Francis confessed that the Church had not done enough to help survivors: in assisting them finding justice, and in making enough “concrete actions” to respond to their plight.

The Pope apologised that the Church had told adopted children that looking for their birth mothers was a “mortal sin.”

“This is not a mortal sin, it is the fourth commandment!” Francis said referring to the command to “honour your father and mother” adding that the Church must have the strength to ensure abuse “never happens again, and for justice to be done”.

Later, during his homily, the Pope said the difficulties facing Christians today can be likened to the time of the first Irish missionaries who brought the Christian faith at a time of “darkness and cultural dissolution”.

An estimated 500,000 people braved the wind and rain to attend the papal Mass at Phoenix Park in Dublin during which the Pope told them not to be discouraged by the “storms of hostility” or the “icy stare” of indifference in the culture around them while living out their faith.

“The challenges that Christians face today are, in their own way, no less difficult than those faced by the earliest Irish missionaries,” Francis said today. “I think of Saint Columbanus, who with his small band of companions brought the light of the Gospel to the lands of Europe in an age of darkness and cultural dissolution.”

The Argentine Pope’s two-day trip to Ireland has taken place under the cloud of the Church’s sexual abuse scandal, with Francis saying this morning at the Marian shrine of Knock, County Mayo that he had “moved” by the stories of the people who have suffered abuse, in particularly the children who were “robbed of their innocence and taken away from their mothers”.

On Saturday evening he spent 90 minutes with abuse survivors, including two who had been two people forcibly separated from their parents by Church-run homes.

But during the Mass this afternoon, Francis used his homily to urge Catholics not to become discouraged and learn how “joyfully” to bear painful difficulties and to “forgive those who have hurt us”.

The success of the early Christian missionaries, he pointed out, was not down to “tactical methods or strategic plans”, but was down to humility and an openness to the Holy Spirit.

“Of course there will always be people who resist the Good News, who ‘murmur’ at its ‘hard words'. Yet like St Columbanus and his companions, who faced icy waters and stormy seas to follow Jesus, may we never be swayed or discouraged by the icy star of indifference or the stormy winds of hostility.”

Among those attending the Mass were 20,000 people from across the world who were in Dublin marking the World Meeting of Families, the central motive for the Pope’s Irish trip.

While headlines around the trip have focussed on abuse, the Mass today took place in an upbeat, celebratory atmosphere and was preceded by 12hours of faith inspired singing, music and drama.

A choir of 3,000 people sung a specially composed version of  Psalm 34 – “The Lord Hears the Cry of the Poor” – while among those bringing up the offertory gifts included a family of one of those killed in the Omagh bombing 20 years ago.

After the Mass the Pope was due to meet with Ireland’s bishops before flying back to Rome.