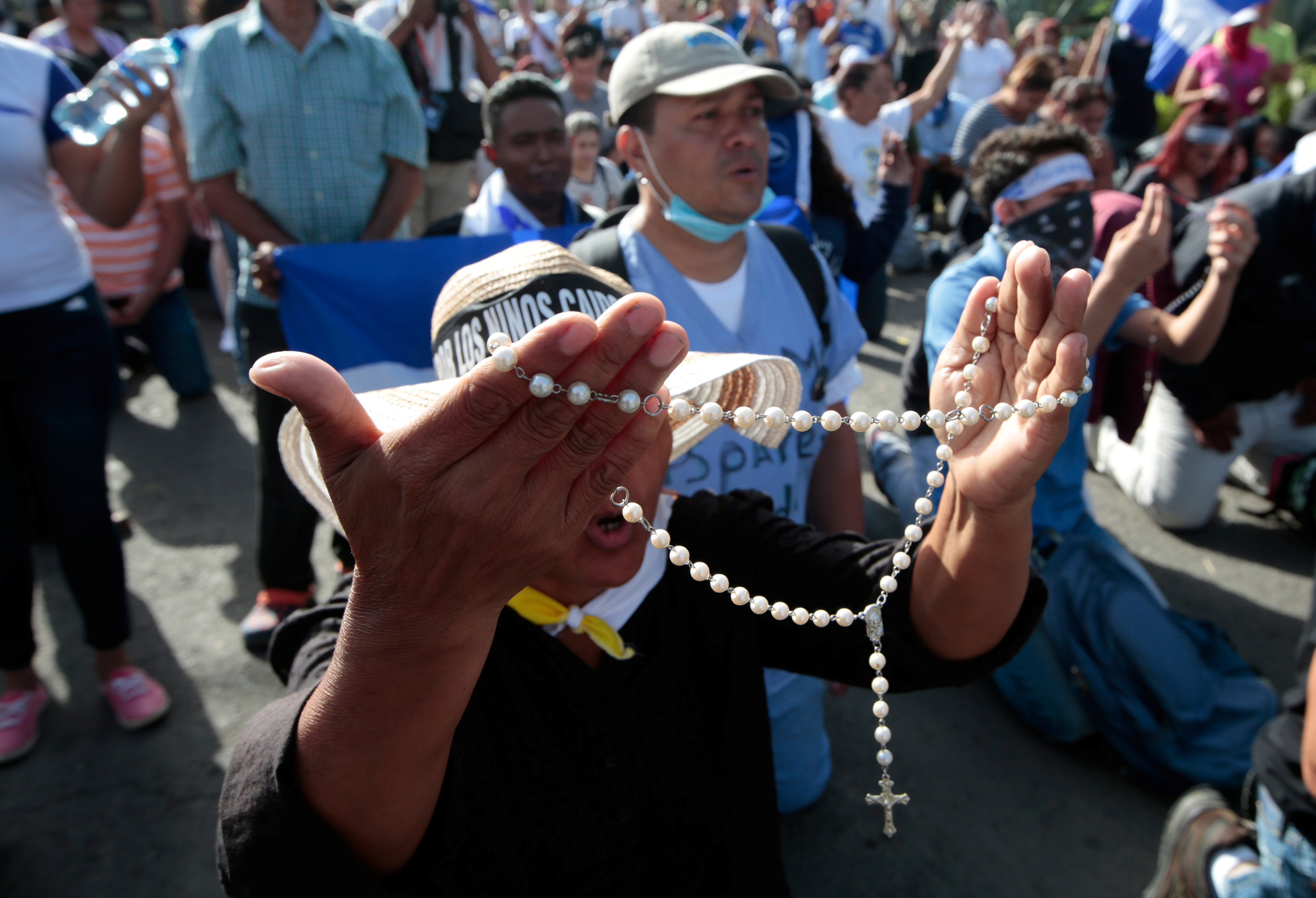 People pray in front of police who block the entrance to Divine Mercy Catholic Church July 14, where students from the National Autonomous University of Nicaragua sought refuge in Managua
CNS photo/Oswaldo Rivas, Reuters

As attacks on Catholic clergy continue and anti-government protesters are besieged by Nicaraguan police and paramilitaries, the bishops said they would pray an exorcism prayer.

The bishops said July 20 would be a day of prayer and fasting "as an act of atonement for the profanation carried out in recent months against God." On that day, "We will pray the prayer of exorcism to St. Michael Archangel."

On July 15, the vehicle of Bishop Juan Mata Guevara of Esteli was shot as he traveled to the city of Nindiri, where he had hoped to stop an attack by police and paramilitaries. The bishop escaped unharmed but the vehicle's tires were shot out and windows broken, said Father Victor Rivas, executive secretary of the Nicaraguan bishops' conference.

An attack July 14 at the nearby National Autonomous University of Nicaragua campus in Managua left two students dead and injured 15 more. Some of the fleeing protesters sought shelter in Divine Mercy Church, where the injured were being treated, but armed assailants stopped ambulances from reaching the church.

A Washington Post reporter was among those trapped in the parish, which churchmen said had been "profaned," and pictures posted to social media showed the church had been pockmarked by bullets.

"They are shooting at a church," Father Erick Alvarado Cole, a pastor at the parish, told The Washington Post. "The government says it respects human rights. Is this respecting human rights?"

On July 9, Cardinal Leopoldo Brenes Solorzano of Managua and his auxiliary, Bishop Silvio Jose Baez, and Archbishop Waldemar Stanislaw Sommertag, the apostolic nuncio, were among clergy from Managua pummeled as they attempted to protect St. Sebastian Basilica in the city of Diriamba from an incursion by a pro-government mob. Bishop Baez and at least one other priest were injured. Journalists also were attacked and had cameras and other equipment stolen.

"In recent days, the repression and violence carried out by the pro-government paramilitaries against the people who protest civically has gotten worse. ... Today, like never before, human rights are being violated in Nicaragua," the bishops' July 14 statement said. "Members of the national dialogue" -- convened by the bishops' conference -- "defenders of human rights and independent media have been the objects of campaigns of defamation by the government."

Human rights groups put the death toll in Nicaragua at more than 350 since April 18, when protests erupted over reforms to the Central American country's social security system. Protests later demanded the ouster of President Daniel Ortega, who has dismissed proposals for early elections and repressed protests with violence.

Churches in Nicaragua have served as centres for treating the wounded and allowing the work of human rights groups. Priests toll church bells to warn local populations of the police and paramilitaries arriving.

Covenant House, known as Casa Alianza in Latin America, issued an urgent call for donations, saying staff were forced to sleep in the shelters due to security concerns and its homes had to buy months of supplies such as food and medicines in advance. Casa Alianza works with homeless and trafficked children.

In their statement, the bishops said brokering a deal through dialogue has proved difficult.

"We have been witnesses to a lack of political will of the government to dialogue in a sincere way and look for real processes that will lead us to a true democracy" and not carrying out "the urgent dismantling of the armed pro-government forces," the bishops' statement said. "Government representatives have twisted the principal objective for which the national dialogue was established."

A Catholic analyst in Nicaragua, who preferred not to be named for security reasons, said the dialogue has been interpreted as an attempt by Ortega and his wife, Vice President Rosario Murillo, to buy time. The bishops also run the risk of being blamed for the collapse of the talks if they withdraw as mediators, the analyst said.

"(The government) and vice president have been appropriating religious language for some time and now are saying the government is doing God's work," the analyst told CNS.

The bishops said they would continue working as mediators, but their role goes beyond sitting at the negotiating table.

"Given the prophetic dimension of our ministry we have seen the urgency of going to the places of conflict to defend the lives of the defenseless, to bring comfort to the victims and mediate with the goal of a peaceful solution to the situation," the bishops said. "The Nicaraguan church will continue to use all of the means it is able to. Our mission as pastors and prophets does not contradict our role as mediators and witnesses given that what we seek is peace and justice as Nicaraguans."