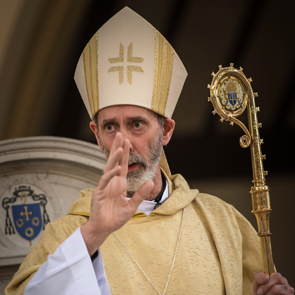 Bishops must be servants, says Nichols at Brentwood ordination

Boko Haram ‘engaged in genocide against Christians’ in northern Nigeria as attacks, killings and abductions continue

Catholic Church officials in northern Nigeria’s diocese of Maiduguri are warning of “genocide” against the Christian minority in the region, where daily attacks, killings and abductions by Islamist terrorist group Boko Haram are continuing unabated.

Since 2009, Christians in the country’s north-eastern states have been under siege from the well-armed, highly trained, and massively funded Islamists.

In the latest attack on Sunday 29 June, the terrorists attacked churches and villages in Borno state killing more than 30 people. The attacks occurred about 10 kilometres from Chibok town, where more than 200 schoolgirls, most of them Christians, were abducted in April and are still missing.

Four churches, including the Protestant Church of Christ of Nigeria, the Pentecostal Deeper Life Bible Church and the 1920 American missionary built Ekklesiyar Yan’uwa  were destroyed. More than 2,000 people have been killed, this year alone, in the Boko Haram campaign of atrocities.

“What is worrying is the silence of government on the on-going genocide of the Christian minority,” Fr John Bakeni, the secretary of the Catholic Diocese of Maiduguri told The Tablet. “We cannot keep track or records of the attacks.  It’s terrible.”

With the increasing attacks, said Bishop Oliver Doeme of Maiduguri, “the human mind could not understand what is happening in the region.”

The violence has forced many Nigerian churches to implement strict security measures such as screening of worshippers and introducing bomb detection equipment.