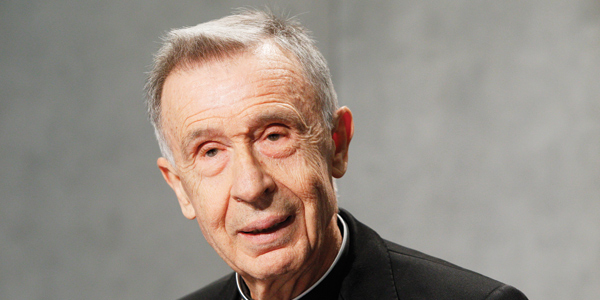 German bishops have responded with anger to a letter from the Prefect of the Congregation for the Doctrine of the Faith (CDF), Archbishop Luis Ladaria, telling them that in the Pope’s view a handout they approved on in­ter­communion was “not ready” for publication.

At their plenary in February, two thirds of the hierarchy voted for the handout that softened the rules on non-Catholic spouses of Catholics receiving Communion. Seven bishops led by Cardinal Rainer Maria Woelki of Cologne said the shift required consultation with Rome, as it pertained to the universal Church.

A delegation including Cardinal Reinhard Marx, the bishops’ conference president, Bishop Gerhard Feige of Magdeburg, one of the co-authors of the handout, and Cardinal Woelki, on 3 May met with Cardinal-designate Ladaria. After the meeting the Pope reportedly told the bishops to go away and find as much unanimity as possible. But a letter from the CDF Prefect dated 25 May, which reached Cardinal Marx on 4 June, informed him and the bishops that Francis had ruled against publishing the document on the grounds of preserving the integrity of Catholic doctrine and unity.

In an article entitled “Obit for an Indescribable Development” for katholisch.de, the German Church’s website, Bishop Feige said that he could not understand why Francis had first asked the German bishops to find as unanimous as possible a solution but had now, one month later, decided to back-pedal. “Many are deeply disappointed and the damage is not yet foreseeable. Old wounds have been reopened. Bitterness and resignation have started to spread,” Bishop Feige said.

Bishop Stefan Oster of Passau, one of the seven bishops who wrote to Rome asking for clarification on the issue of intercommunion, told the Catholic news agency KNA on 8 June that there were “neither winners nor losers” in the inter­communion altercation, an issue that affected all Christians “including the Orthodox”. The Greek Orthodox Church in Germany this week offered support to Cardinal Woelki. “We are following the discussions in your Church [on Eucharistic hospitality] with fraternal helplessness,” Metropolitan Augoustinos (Lambardakis) told Cardinal Woelki at the annual reception of the Greek-Orthodox Metropolitanate in Bonn.

Cardinal Walter Kasper, former president of the Pontifical Council for Promoting Christian Unity, alleged that the letter from the CDF to Cardinal Marx had been leaked. The “Curia employees who leaked the letter” must be called to account, an angry Cardinal Kasper told katholisch.de on 7 June. “What infuriates me is that the letter, addressed to Cardinal Marx personally, was obviously leaked before it reached the cardinal. That is a continuation of [the 2012] Vatileaks [scandal in which the butler of Pope Benedict XVI was found to have leaked private documents to journalists] which has greatly harmed the Curia, the Pope and the Church,” Cardinal Kasper underlined.

The former CDF Prefect, Cardinal Gerhard Müller, told the German press agency dpa that the Pope had put his foot down (on the debate) too late. “The communication cord was pulled shortly before the abyss,” he said. With their push to allow the Protestant partners in interchurch marriages to partake of the Catholic Eucharist, the German bishops had provoked irritation internationally, Cardinal Müller told the Passauer Neue Presse on 9 June. Catholics all over the world had expressed concern regarding the German bishops’ claim to be the “pacemaker and schoolmaster” for the world Church. “That was once again a typically German own goal!” he said.