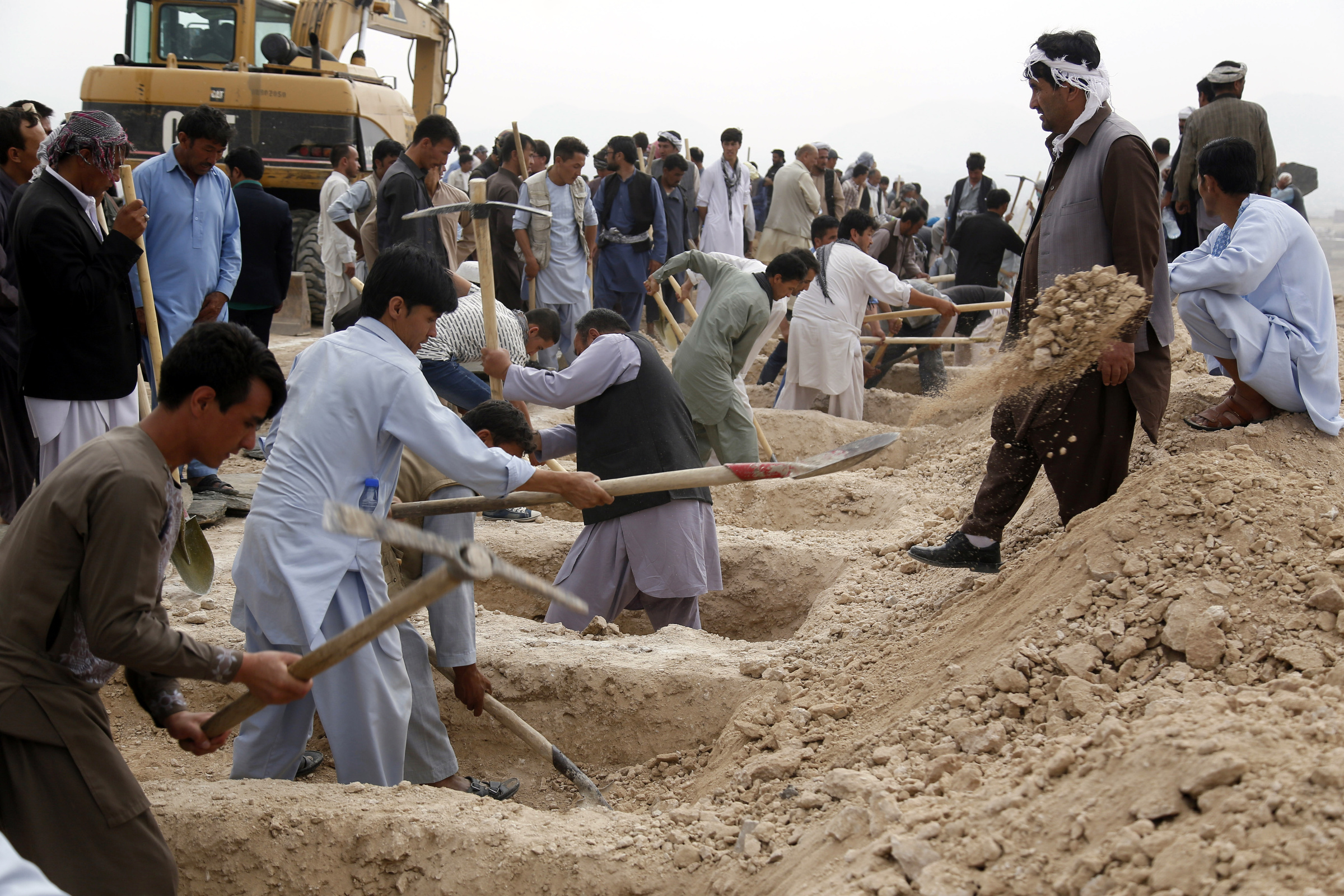 Francis rules out ‘interference’ in the affairs of the Orthodox

Pope Francis assures Russian Orthodox Church that he has 'no desire whatsoever' to interfere in the affairs of their church. 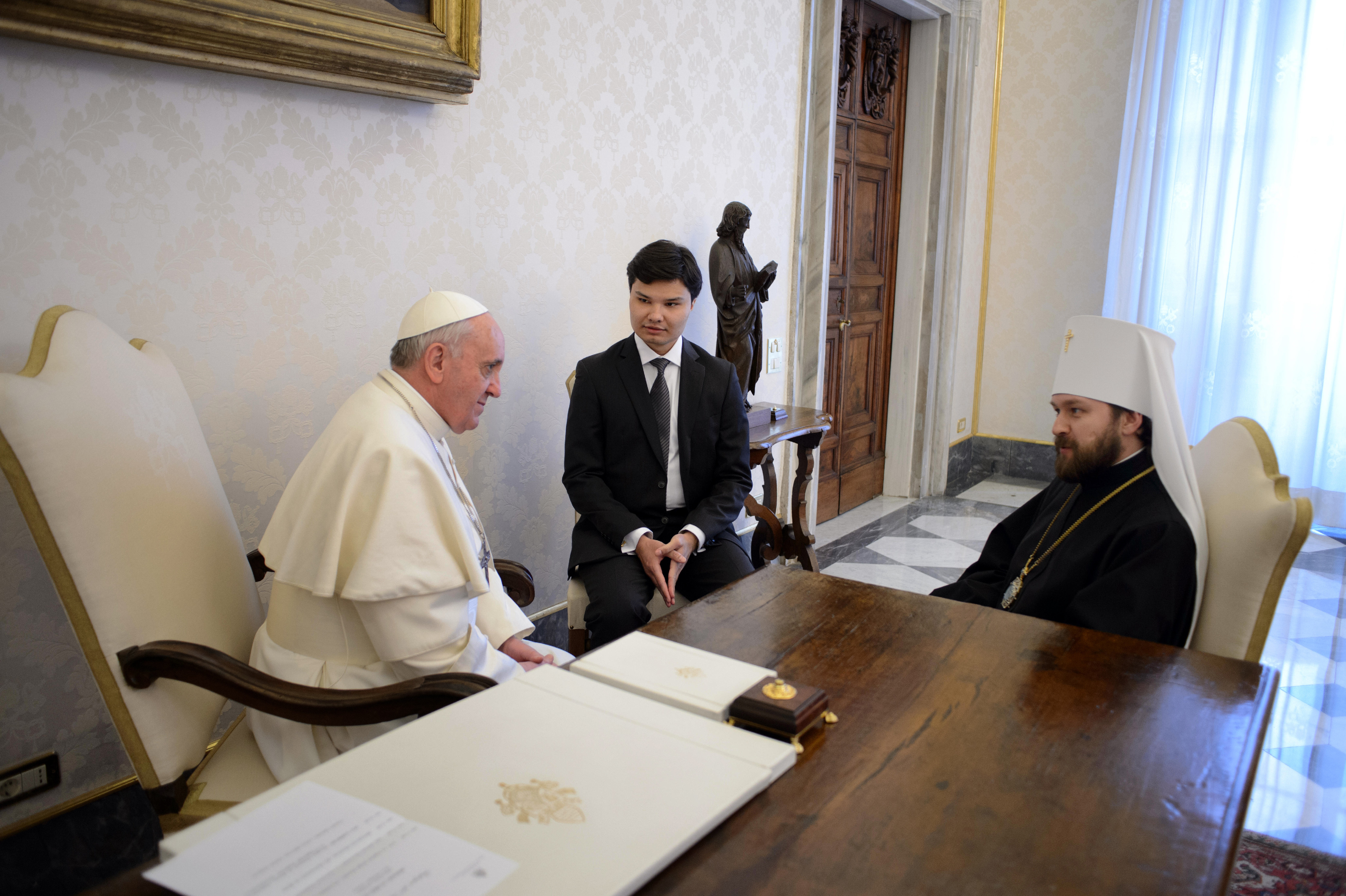 Pope Francis (L) talks with Metropolitan Hilarion, the foreign minister of the Russian Orthodox Church, during a previous private meeting at the Vatican
Photo: ABACA/ABACA/PA Images

Pope Francis has assured leaders of the Russian Orthodox Church that he has “no desire whatsoever” to interfere in the affairs of their church.

At a high-level meeting at the Vatican between the Pope and a delegation from the Russian Orthodox Church, Pope Francis emphasised the common ground between the Churches, while telling Metropolitan Hilarion of Volokolamsk that the Vatican has no desire to interfere in internal Russian Orthodoxy.  “I want to confirm most of all in front of you dear brother and before you all that the Catholic Church will never allow an attitude of division to be born on its own. We will never allow it. I do not want it. In Moscow, in Russia, there is only one Patriarchate, yours. We will not have another.”

The Russian delegation was headed by Metropolitan Hilarion, who is head of the Department for External Relations of the Moscow Patriarchate, and who who has been one of the leading opponents of closer ties with the Catholic Church. However, in greeting the Pope, Hilarion underlined the “common witness of the Churches on the universal values "of peace, love, mercy and forgiveness”, before emphasising:  “In the world, which is going through a period of dramatic divisions, the pacifying and humanitarian role of the Churches can not be underestimated."

The exchange between Pope Francis and the Russian Church leaders contained two important allusions crucial to relations between the two Churches as they forward.

Earlier this month Metropolitan Hilarion told state-run NTV that the head of the Ukrainian Greek Catholics, Archbishop Svyatoslav Shevchuk, has “repeatedly stated his support of the project for a unified Local Orthodox Church of Ukraine while saying that the unity of this Church should be built on the successor of St Peter, that is, the Pope of Rome.” Pope Francis’ phrasing, “The Catholic Church, the Catholic Churches...” will almost certainly be seen as a tacit endorsement of the Moscow position in this toxic dispute within Orthodoxy.

A little more opaquely, the phrase “not even in political matters” is likely to be read as a rejection of the allegations that are by now customary in discussion in the West that the Orthodox Church is too closely tied to President Vladimir Putin.

Metropolitan Hilarion offered what may look at first like a somewhat evasive acknowledgment of the common ground the Churches can find. A precious way of “healing” is emerging, he said, in the number of pilgrimages to the relics of the saints. But the importance of this statement, and the Orthodox devotion to the saints, should not be underestimated. In 2017 the relics of St Nicholas were loaned by the Basilica di San Nicola, in Bari, Italy, to Russia, and venerated by more than a million Russians in Moscow and St Petersburg.

This “universal language” allows us to know “the traditions, history and artistic heritage of the Church and of the people of one or the other country”, Hilarion said. This must favour mutual understanding, dialogue between Orthodox and Catholics and “international and inter-religious peace”.

The substance behind these words will soon be tested. Pope Francis has invited all Christian patriarchs to Bari itself, on 7 July, to pray for peace and in particular, for the persecuted Christians of the Middle East.

One positive result of the Russian intervention in Syria claimed by the Russian Orthodox is that the Christian presence in Syria has not been entirely wiped out, and indeed Christians are returning to places once controlled by Islamic State terrorists. By contrast the decision by George W Bush and Tony Blair to invade Iraq in 2003 precipitated the decimation of Iraq’s Christian population. In Iraq in 2003 there were 1.4 million Christians; by 2016 just 275,000 remained.  The attempt to help Christians returning to Iraq will be high on the agenda in Bari in July.

So far Metropolitan Hilarion’s attendance appears to be confirmed, while a visit to Italy by Russian Orthodox Patriarch Kirill seems unlikely. However, if Kirill were to attend this gathering it would be seen as a major boost for the ecumenical efforts of Pope Francis, as well as for the – for the most part negligible – international efforts to defend Christians in the Middle East.

Cardinal Gualtiero Bassetti, president of the Italian bishops’ conference, also took part in yesterday’s gathering, and his words were particularly pertinent in this regard. Addressing the Pope, he said: “We are convinced that in a world that would want us to be divided, Christians can be a sign of unity and artisans of peace, despite their diversity.” He then went on to say that, even if the Churches are still divided and dialogue is slow, Christians are united in many parts of the world in the name of “blood ecumenism”.

He reminded the gathering: “When they kill you out of hatred of Christ and the Christian faith, they do not ask if you are a Catholic or if you are Protestant, Lutheran, Orthodox or Coptic. You are of Christ.”