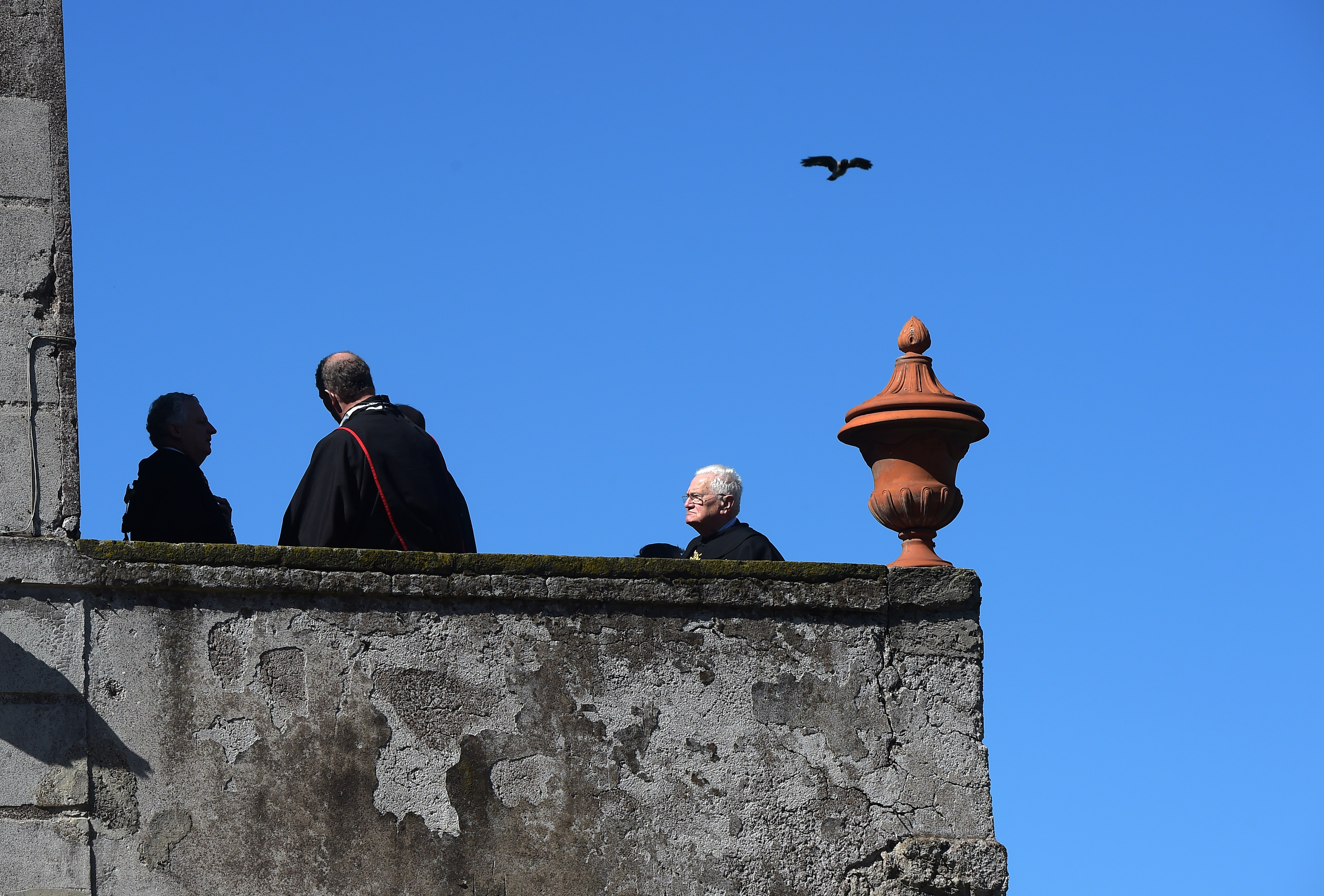 Catholic and Orthodox leaders in Syria have denounced the air strikes by the US, UK and France 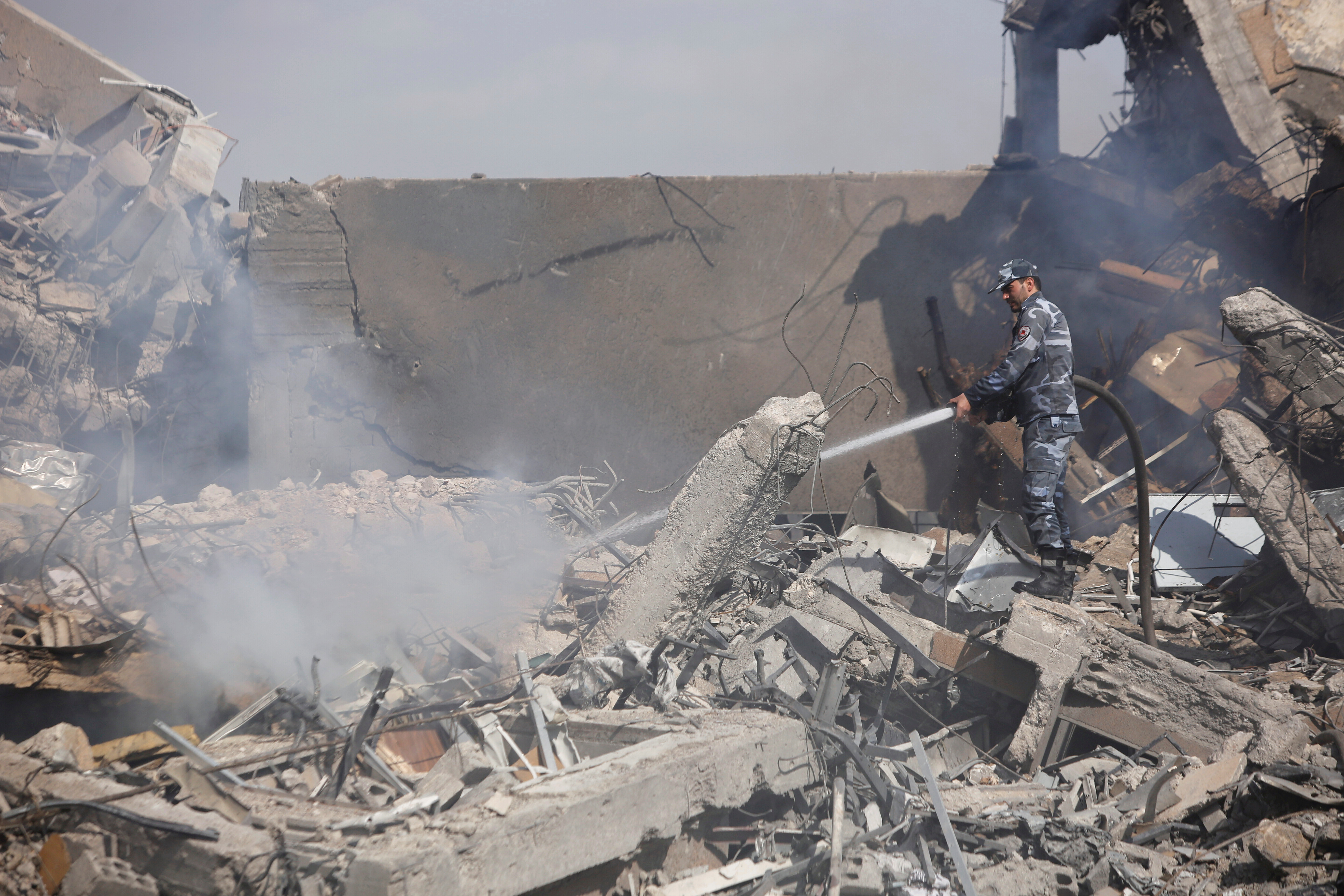 Pope Francis has called for prayers for peace after the air strikes by the US, UK and France in response to the suspected chemical attack in Douma.

Speaking after his Regina Coeli at St Peter's today, he said: "I am deeply disturbed by the current world situation, in which, despite the tools available to the international community, it is difficult to agree on a common action in favor of peace in Syria and in other regions of the world.

Hours earlier, Catholic and Orthodox church leaders in Syria united to condemn the air strikes in a statement issued by the Patriarchates of Antioch and all the East for the Greek Orthodox, Syrian Orthodox, and Greek-Melkite Catholic Damascus. 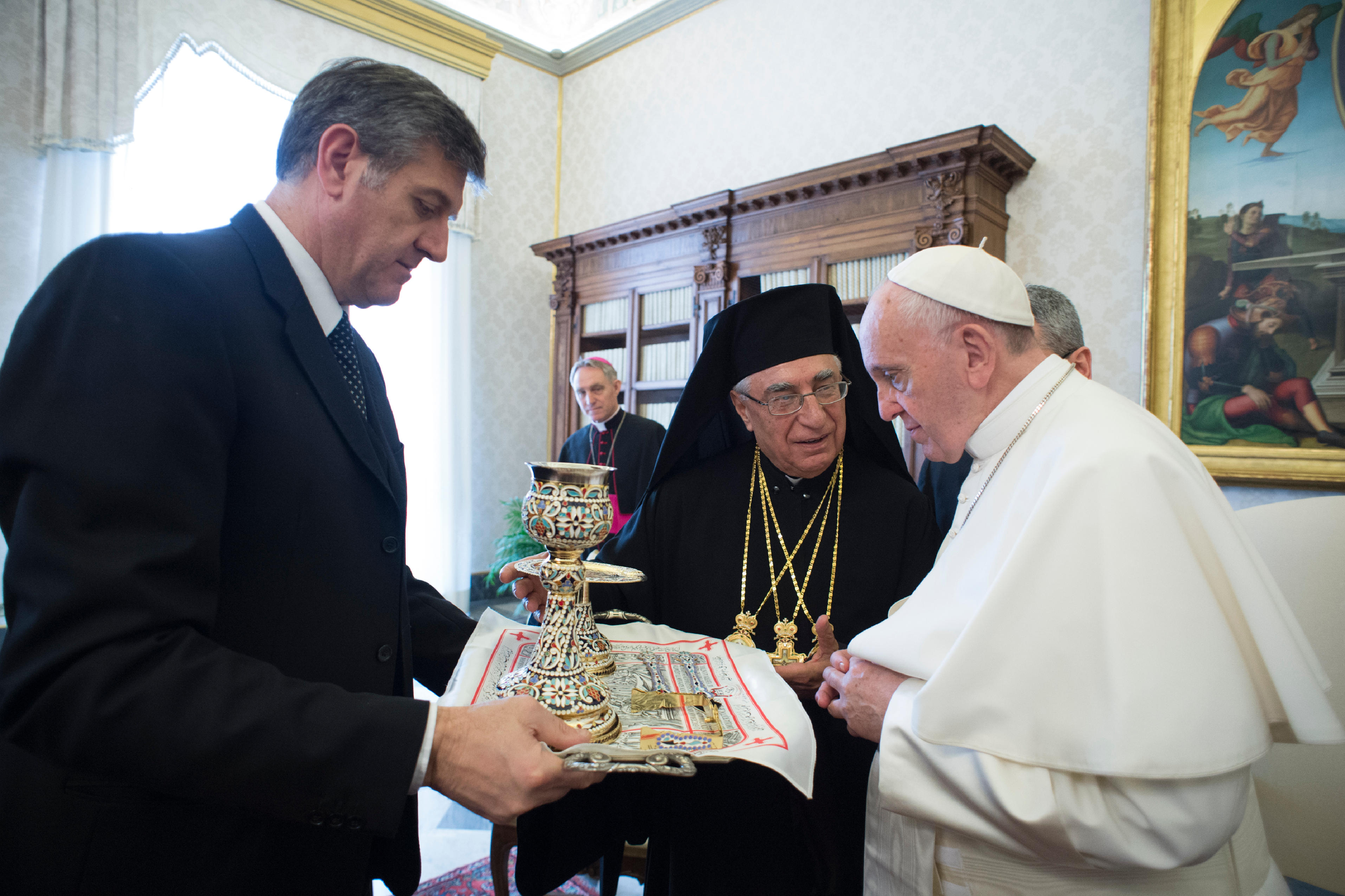 They state that the "brutal aggression" is a "clear violation of the international laws and the UN Charter", describing it is an "unjustified assault" on a sovereign country that is a member of the UN.

"It causes us great pain that this assault comes from powerful countries to which Syria did not cause any harm in any way," the church leaders state. "The allegations of the USA and other countries that the Syrian army is using chemical weapons and that Syria is a country that owns and uses this kind of weapon, is a claim that is unjustified and unsupported by sufficient and clear evidence."

They continue to say that the timing, when the independent International Commission for Inquiry was about to start its work in Syria, undermines of the work of this commission.

"This brutal aggression destroys the chances for a peaceful political solution and leads to escalation and more complications," they say, arguing that it will encourage terrorist organisations to continue in their terrorism.

They call on the UN Security Council to play its natural role in bringing peace rather than contribute to escalation of wars.

"We call upon all churches in the countries that participated in the aggression, to fulfil their Christian duties, according to the teachings of the Gospel, and condemn this aggression and to call their governments to commit to the protection of international peace. We salute the courage, heroism and sacrifices of the Syrian Arab Army which courageously protects Syria and provide security for its people. We pray for the souls of the martyrs and the recovery of the wounded. We are confident that the army will not bow before the external or internal terrorist aggressions; they will continue to fight courageously against terrorism until every inch of the Syrian land is cleansed from terrorism. We, likewise, commend the brave stand of countries which are friendly to the Syria and its people." 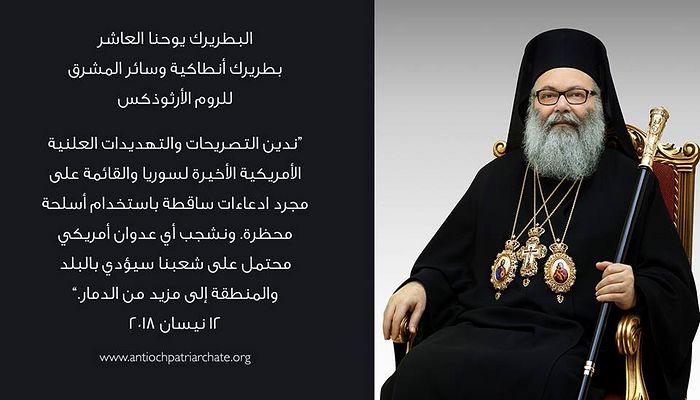 In addition, on Friday Patriarch John X of Antioch and All the East (pictured above) released a short statement in response to the tweets from President Donald Trump threatening the aggression.

In the statement, posted on the Antiochian Patriarchate’s official Facebook page, he says: “We deplore any possible American aggression on our people."

The Archbishop of Canterbury Justin Welby issued "A Prayer For All Caught Up In The War In Syria" on his Facebook page.

Lord of all power and might, wisdom and love,
You gave your only Son to live with the suffering and poor, to die for our sins and rise from the dead so that we may live.
In your hands justice is perfect, and mercy and righteousness meet.
We pray for all caught up in the war in Syria; for the innocent who are poisoned by its weapons and bereaved or wounded by its violence,
for those serving in our armed forces, for those who make decisions and order actions.
Be merciful to the people of Syria, bring justice in their suffering, and let new life arise where there is now destruction and fear.
We pray these prayers in the name of your risen Son, Jesus Christ our Lord, Amen

Pic 1: A Syrian firefighter uses a fire hose inside the destroyed Scientific Research Center April 14 in Damascus. The United States, France and Britain launched airstrikes in Syria to punish President Bashar Assad for an apparent chemical attack against civilians and to deter him from doing it again. (CNS photo/Omar Sanadiki, Reuters)

Pic 2: Pope Francis accepts gifts from Melkite Patriarch Joseph Absi during a meeting with the Melkite synod of bishops at the Vatican Feb. 12. The Melkite Church is an Eastern Catholic church in full communion with Rome. (CNS photo/Vatican Media)

Pic 3: His Beatitude Patriarch John X of Antioch and All the East (credit: Antiochean Patriarchate)