Mary McAleese: Church is 'one of the last great bastions of misogyny' 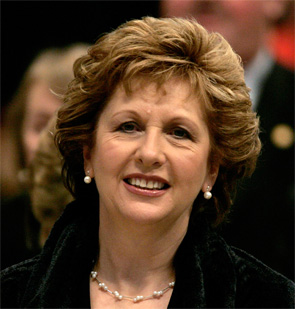 Mary McAleese, the former President of Ireland, is leading a charge for greater involvement for women in decision making roles inside the Catholic Church.

She is one of the main speakers at a conference in Rome focussing on this topic, telling reporters that if female ordination is impossible then the Church hierarchy must start to offer alternatives.

“The Pope says its off the agenda - fine, but what’s on the agenda?” she told reporters at a press conference in Rome to launch the Voices of Faith gathering that starts today. “How do you propose to include women in decision making, since all decision making, discernment in relation to faith formation, policy and direction is filtered excessively through an all male cast.”

McAleese says she believes the ban on ordaining women is “codology” dressed up as theology and accuses the Church of being “one of the last great bastions of misogyny”.

The former Irish leader’s outspoken criticism of Church positions on ordination and gay Catholics, combined with her knowledge of Canon Law, which she studied in Rome, has made McAleese something of an “enfant terrible” with some of the Vatican authorities. McAleese’s son is gay and she says Church descriptions of same-sex orientation as “disordered” is a factor behind causing damaging internal conflicts for young homosexual Catholics.

It is believed that her presence - and two other gay rights advocates - on a roster of proposed speakers led Cardinal Kevin Farrell to refuse his permission for the Voices of Faith event to take place inside the Vatican City State. The cardinal, a pastoral moderate who leads the dicastery for laity, family and life, said an event in the Vatican presupposes Papal support, although he stressed he was open to dialogue with the group. The conference is now taking place in the headquarters of the Society of Jesus, which is within walking distance of St Peter’s Square.

At the press conference former President McAleese spoke on a panel alongside Lesley-Anne Knight, the former Secretary General to Caritas - the Church’s charitable arm - and Tina Beattie, Professor of Catholic Studies at the University of Roehampton.

Professor Beattie said the lack of discussion over women’s roles was the major problem, and urged Church leaders to follow the section on dialogue in Pope Francis’ family life text, Amoris Laetitia.

“The combination of two different ways of thinking can lead to a synthesis that enriches both,” the Pope writes. “The unity that we seek is not uniformity, but a ‘unity in diversity’, or ‘reconciled diversity’.”

Professor Beattie says the Church has gone down a “catastrophic cul-de-sac by excluding women” arguing that the issue must now be focussed on.

The Voices of Faith organisers would like the Pope to set up a women’s commission which is set out in a paper of proposals they have submitted to Cardinal Pietro Parolin, the Holy See’s Secretary of State.

In 1994 John Paul II ruled against female ordination and said this position should be “definitively held” by all Catholics. Both Benedict XVI and this Pope have maintained the ban, although Francis has set up a commission to study the question of female deacons.

On women, McAleese said that this Pope had “been a journey that has dwindled into disappointment” and urged for action on the female deacons front.

The panellists also stressed that the issue of women went much further than ordination. Professor Beattie pointed out that the Pope had said reforming the Roman Curia was like cleaning the Egyptian Sphinx with a toothbush. “Give us [women] a toothbrush and the sphinx will be clean in no time,” she joked.