Church of England bans its priests from joining far-right groups

Nuncio sees Irish renewal – but Dublin has two priests under 40 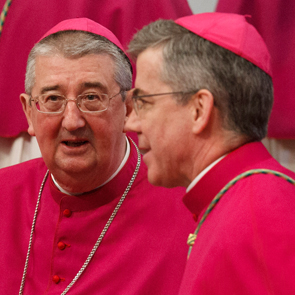 The papal nuncio to Ireland has spoken of a new beginning in the Church in the country and a renewed enthusiasm among young Catholics for their faith.

Archbishop Charles J. Brown, who was appointed nuncio to Ireland at the peak of the clerical abuse scandal in 2011, said that Irish Catholicism had entered a new “springtime”.

He told the US-based Catholic News Service: “The Church in Ireland has been through a good 20 years of real suffering, of a winter. I think that after this period of difficulty something new is beginning. We are beginning to see green shoots of renewal.”

Young Irish seminarians he met at St Patrick’s College, the national seminary in Maynooth, and in Rome had a renewed enthusiasm for their faith, he added.

“A new generation has gone through that difficult period but has been purified by that,” he said.

Yesterday the Archbishop of Dublin, Diarmuid Martin, revealed that only two priests in Dublin are younger than 40. Giving a homily in Dublin’s Pro Cathedral he said he anticipated greater lay involvement and shared responsibilities across parishes in the future as the number of priests in Ireland continued to decline.

Archbishop Brown said that he was positive about the state of vocations in Ireland, but acknowledged that the number of priests would drop.

"Parishes will have to share resources and combine and cluster, and that will be an opportunity for lay people to take on a larger role in the church," he said.

He called for women to play a more visible role in the Church, including in the Holy See, adding that this could happen under Pope Francis.