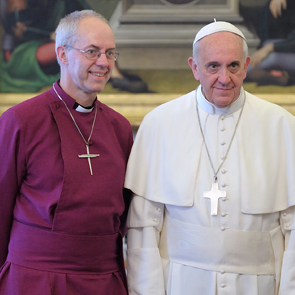 Welby and Pope to discuss trafficking in June

Church must stop being like Tesco, says new Irish bishop

The Irish Church must stop trying to be a “spiritual Tesco” and instead focus on re-organising itself in order to serve a population who are unaware of the Gospel, a leading Irish bishop has said.

Bishop Donal McKeown, who was installed as bishop of Derry in April, told The Tablet that the Church can no longer try and offer “all possible services” in order to keep its “market share”. The bishop commended the approach of some dioceses in Austria where priests do not offer Masses for individuals who have died whenever people request them but offer them monthly or weekly instead.

“What we are looking at is not simply how do we reorganise the structures of Church and the delivery mechanisms but how do we actually envision a new ecclesiology for a different environment, where the majority of the population in Ireland haven’t really heard the gospel story.”

He criticised members of the Association of Catholic Priests for what he called their negativity and depressing views about the various challenges facing the Church, such as the decline in priest numbers. Rather he said the trend was evidence of the end of a particular model of Church and ought to be seen as an opportunity.

“I am keen to find new ways forward rather than say it is terrible and all this is going to go wrong.”

Referring to Pope Francis’ Evangelii Gaudium, he said it was important for the local Church to discern its way forward, seeing the changes as opportunities rather than as a crisis.

He said people in Ireland see the Church as a series of things you do or a series of isolated teachings, but in many cases there was no deep personal commitment to faith.

“We are looking at not just how we deliver the services but how we are Church in a different way.”

He revealed his priority for Derry was to have a “diocese talking to itself about its mission” and next year the bishop is planning a drive for vocations across the Irish Church.