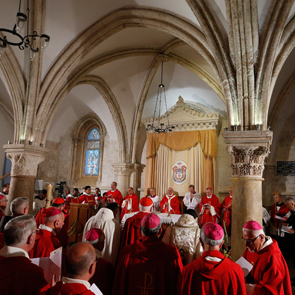 Charlie O’Donnell, a consultant in emergency and intensive care medicine, said the best advice he could give to an “orthodox” Catholic wishing to specialise in obstetrics and gynaecology would be to “emigrate”.

Dr O’Donnell told the conference at Ealing Abbey, west London, on 17 May that a Catholic training to be a consultant in obstetrics and gynaecology would soon find he or she had conscientious objections to such tasks as prescribing artificial contraceptives, giving unmarried couples fertility treatment or Viagra to gay couples.

He said that supervising consultants do not have the backup to allow trainees to opt out if they have moral objections to such work. However, conscientious objection to abortion is allowed because of specific provision in the 1967 Abortion Act.

“To be a sound Catholic regarding sexual ethics it is not possible to train as a consultant obstetrician and gynaecologist but this is not because of discrimination against Catholics. There is a total conflict of culture of what is good sex, a dichotomy of belief between what we as Christians believe is good overall for the individual and what secular society believes,” said Dr O’Donnell.

Last week the president of the CMA, Dr Robert Hardie sought clarification concerning reports that doctors and nurses with conscientious objections would be barred from obtaining a diploma from the Faculty of Sexual and Reproductive Health (FSRH). Medical staff normally need the diploma to work in sexual and reproductive healthcare.

Jim McManus, the Vice Chairman of the Healthcare Reference Group for the Catholic Bishops' Conference of England and Wales, said that any move that would result in Catholics being excluded from practising as gynaecologists would be unlawful.

“It would be a clear breach of the Equality Act [2010] for Catholics to be excluded from being able to practise,” he said. “The advice that I have had from a senior barrister is that it would be unlawful, and would leave any employer seeking to implement that open to legal challenge.”