Francis described the Cardinal as having done 'so much for the Church, in different situations, with joy and with tears' 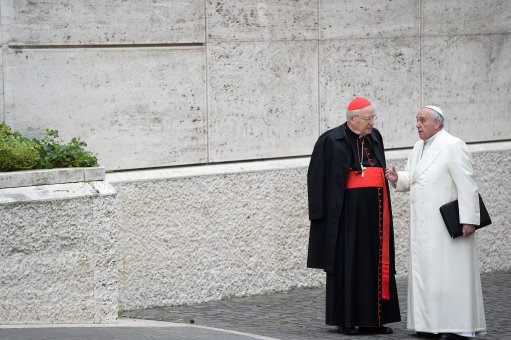 The Pope today marked the 90th birthday of the Vatican’s elder statesman, Cardinal Angelo Sodano, describing him as a “ecclesially disciplined” man who had served the Church in a variety of situations.

Cardinal Sodano is the Dean of the College of Cardinals, a role that gives him responsibility for summoning a conclave and leading the cardinals during the interregnum period when there is no Pope, and acting as the public face of the Church during this time.

This morning the Pope celebrated a Mass in the Vatican’s Pauline Chapel to mark the recent passing of the cardinal’s birthday - he was born on 23 November - and at the end said Sodano was someone who has done “so much for the Church, in different situations, with joy and with tears.” He also pointed out that anniversaries encourage us to remember both God’s grace but also “our smallness, our mistakes, even sins.”

Francis added: “But the testimony that today seems to me perhaps the greatest that he gives us is that of an ecclesially disciplined man, and this is a grace for which I thank you.”

From 1991 to 2006, Cardinal Sodano served as the Holy See’s Secretary of State - effectively the Pope’s number two - and is widely respected as a highly skilled diplomat and Vatican power broker. In a sign of his enduring influence, the congregation in the Pauline chapel was made up almost entirely of cardinals and the Mass was sung by the Sistine Chapel choir.

Cardinal Sodano has, however, attracted controversy over his handling of high profile clerical sexual abuse cases reportedly lobbied against an investigation into Marcial Maciel, the Legionaries of Christ founder who was later found out to be serial abuser. He also reportedly did the same in the case of Cardinal Hans Herman Groer, Archbishop of Vienna, who resigned following allegations of abuse.

Born in Asti, Northern Italy, the cardinal was ordained in 1950 and then entered the Holy See’s diplomatic service nine years later: his early career saw him serve across Latin America earning an expertise in mediating disputes. Later, as Secretary of State, he lobbied former British Prime Minister Tony Blair for the release of General Augusto Pinochet so he could be tried for crimes in Chile. When John Paul II was ill, the cardinal took on an increasingly important role in the governance of the Church becoming vice-dean of the college of cardinals in 2002 and then dean, after Cardinal Joseph Ratzinger was elected Pope Benedict XVI in 2005.

In his homily, the 90-year-old cardinal, who still appears to be in good health, said that while his “ministry has taken place in different fields” his priestly mission had remained constant.

Thanking the Pope for celebrating the Mass, Sodano pointed out the celebration was taking place on the Feast of St Ambrose. “Saint Ambrose has left us with a message: where [there] is Peter, there is the Church,” he said.