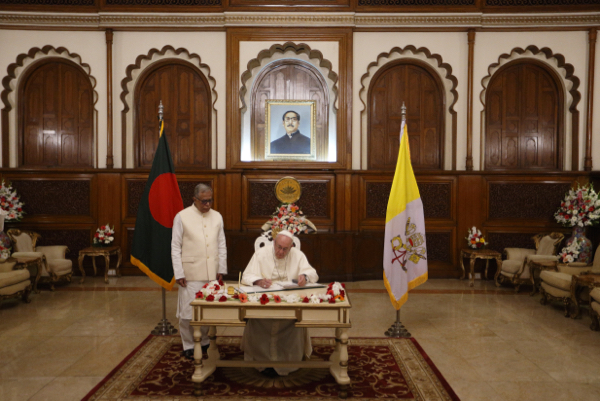 Pope Francis kicked off his visit to Bangladesh by calling on the international community to take “decisive measures” to help solve the Rohingya crisis, praising his hosts for their generosity in welcoming hundreds of thousands fleeing Myanmar into an already over populated and desperately poor country.

Calling the Rohingya Muslims “our brothers and sisters” the Pope said world governments must address the crisis which should include giving Bangladesh “immediate material assistance” to help deal with the needs of the displaced with the country’s president saying they had welcomed a million people.

“The spirit of generosity and solidarity which is a distinguishing mark of Bangladeshi society has been seen most vividly in its humanitarian outreach to a massive influx of refugees from Rakhine state, providing them with temporary shelter and the basic necessities of life,” Francis explained. “This has been done at no little sacrifice.”

As was his practice in Myanmar, the Pope did not mention the word “Rohingya” something that his hotly contested among those in the country known as Burma, and where Francis visited for three days before coming to Bangladesh.

Tomorrow, he will take part in an inter religious service where at least one Rohingya Muslim present, although more could attend.

This afternoon the papal plane flew from Yangon to Dhaka, one the most densely populated city in the world, where the 80-year-old Pope was greeted by the country’s President, Abdul Hamid, a military parade and children dancing in traditional costumes. After the initial greetings the normally heavily congested city’s roads were cleared so Francis could visit a shrine to the martyrs Bangladesh’s independence struggle and then to a house of Sheikh Mujibur Rahman, known as “Bangabandhu”, who was the country’s first president and considered father of the nation.

As an intriguing aside, when signing his name in the visitors book at the shrine, the Pope put “Roman Catholic Bishop” under the column “designation.” Since his election Francis has repeatedly stressed his title as Bishop of Rome. 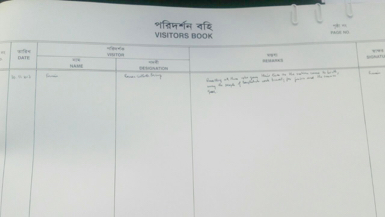 The papal motorcade then moved to the Presidential Palace which had been decked out in Christmas-style lights with soldiers dressed in green guarding the entrance as government officials, diplomats and dignitaries gathered in a large ballroom to hear the Pope’s address to them.

Completed in 1911 the palace was used by the Viceroy of India in British colonial times and later as a central office for the government: inside there was a long hallway with five crystal chandeliers which the Pope and the president entered together before sitting down in a room off the hallway. After a twenty minute meeting they posed for photos and exchanged gifts with the president presenting Francis with a golden sculpture of a rickshaw, a traditional gift in Bangladesh.

Afterwards they entered the ballroom with President Hamid speaking first. He praised the Pope for his “passionate voice” against the “ruthless atrocities committed by the Myanmar army” against the Rohingya Muslims, whom he mentioned by name.

“You also remind us that mercy is the most merciful message of Almighty God who created us equal,” Hamid stressed. “That means welcoming the stranger - be it the refugee who flees from the war torn lands, or the immigrant who leaves home in search of a better life.” He said that almost a million

The country struggles to accommodate the 160 million inhabitants with many Bangladeshi immigrants leaving for new lives in Europe, and are particularly visible in countries such as Italy. At the same time, thanks to a youthful population and a cheap labour force, the country has a growing economy with many high street clothing chains using workers from Bangladesh to have clothes made.  In his speech at the palace the Pope referenced the large network of rivers and waterways the country - known as Golden Bengal - has a natural beauty: due to climate change, however, it is at serious risk of rising sea levels and regularly experiences damaging floods.

Under British India rule Bangladesh was part of the Bengal presidency only becoming an independent country following a war of liberation against Pakistan in 1971. Before this it had been “East Pakistan” united with “West Pakistan” on the grounds that Muslims in South East Asia should be one nation and that Hindus another (India). Today, the country is governed by a female Prime Minister Sheikh Hasina, while the president holds a more ceremonial position.