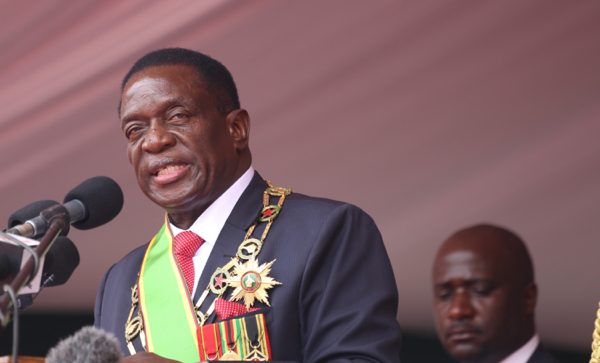 Zimbabweans should have a voice in the country's new governance 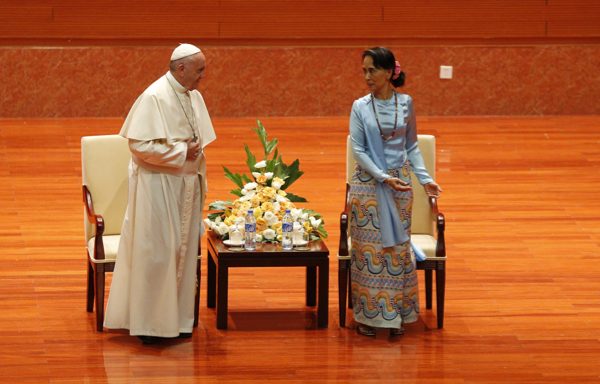 Pope Francis used his first full day in Myanmar to call on its leaders to respect all groups in the country, but stopped short of explicit reference to the Rohingya crisis.

In a speech at a convention centre in Nay Pyi Taw, the country’s capital, the Pope used diplomatic language calling for a process of “peace building and national reconciliation” based on “commitment to justice and respect for human rights.”

Human rights groups and other western commentators are likely to be disappointed the Pope refrained from mentioning the Rohingya muslim group by name, but Francis appears to be throwing his support behind Aung San Suu Kyi while following the local Church’s advice.

Myanmar’s state counsellor and foreign minister has been heavily criticised for not speaking over the Rohingya crisis which has seen thousands of Muslims driven out of Myanmar’s Rakhine state into Bangladesh in what has been described by the United Nations as a “text book case” of ethnic cleansing.

Yesterday she was formally stripped of her freedom of the City of Oxford, a place where she lived and studied for many years.

In her speech - delivered before the Pope’s - the Catholic educated leader thanked the Pope for his visit and support.

Suu Kyi said: “As we address long standing issues, social, economic and political, that have eroded trust and understanding, harmony and cooperation, between different communities in Rakhine, the support of our people and of good friends who only wish to see us succeed in our endeavours, has been invaluable.”

Like the Pope, she stressed the need for national reconciliation, justice and freedom although she did not use the “R-word”, instead talking about the “situation in the Rakhine”.

She joked that, given she had been educated at St. Francis Convent in Rangoon, this entitled her to “special blessings from your Holiness”, before finishing her address with her few words of Italian. 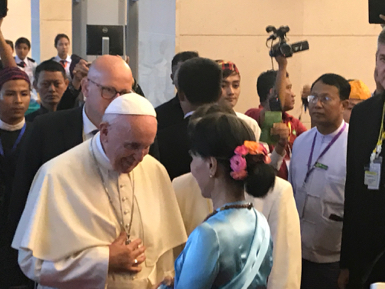 A Myanmar Church source stressed to The Tablet that the Rohingya crisis has been used by the military to discredit the 72-year-old state counsellor and as a way to show she cannot run the country.

The military, who are seen as responsible for driving out the Rohingya, have largely escaped criticism and while Suu Kyi’s reputation suffers, the country’s top General Min Aung Hlaing has ambitions for the presidency.

“This [crisis] is a way for the military to take back control of the country,” the source said, adding that Suu Kyi was the best hope for democracy.

Ahead of the Pope’s speech, Myanmar’s Cardinal Charles Bo warned Francis not to mention the “R-word” for fear of sparking protests, and because use of the phrase is contested by Buddhist and military leaders. In the Vatican, Francis has repeatedly raised the plight of the Rohingya.

But as the first Pope ever visit to the country formerly known by Burma, Francis has adopted a more prudent and diplomatic approach and in his speech appealed for a peace settlement which respects “each member of society” and “each ethnic group”.

Myanmar is made up of more than 100 ethnic groups although the stateless Rohingya are not official recognised, with many viewing them as immigrants who have recently arrived from Bangladesh.

Religion also plays a role with the Buddhist majority country with a number of monks whipping up fear against Muslims. In his speech the Pope said “religious communities have a privileged role to play” in the work of reconciliation. 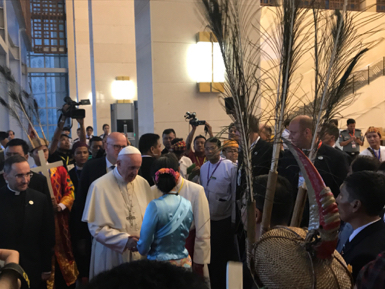 “The religions can play a significant role in repairing the emotional, spiritual and psychological wounds of those who have suffered in the years of conflict,” the Pope said. “Drawing on deeply-held values, they can help to uproot the causes of conflict, build bridges of dialogue, seek justice and be a prophetic voice for all who suffer.”

This morning the Pope met with a diverse range of religious leaders from Myanmar calling for them not to be fearful of differences but to help each other build up the country. He ended the meeting with a prayer: “May the Lord bless you and protect you. May his face shine upon you and show you his peace.” At the end of the gathering, and in a sign of his desire to build bridges during his visit, he met separately with Sitagu Sayadaw, a prominent Buddhist leader. While Sayadaw has been praised for his charitable works he’s given support to the army’s persecution of the Rohingya.

Francis delivered his speech in a sprawling 95 square metre convention centre which was built in 2010, reportedly with Chinese financing. Nay Pyi Taw was unilaterally designated as the capital by the military in 2005 although it is a sparsely populated part of the country (there is just one Catholic parish serving the area).

Before arriving at the convention centre the Pope met with the President of the country, Htin Kyaw, and then with Aung San Suu Kyi. In a commemorative book signed by the Pope in the presidential palace he wrote: “Upon all the beloved people of Myanmar, I invoke the divine blessings of justice, peace and unity,” before an exchange of gifts. The Pope gave the president a 82-panel folding manuscript from the Vatican museums narrating the life of the Buddha in seven episodes.

While the Pope has signalled his support for Aung San Suu Kyi – who herself was instrumental in ensuring Francis’ visit took place – the presence of the military has loomed large.

Yesterday, in a breach of normal protocol, he received a “courtesy visit” from General Min Aung Llaing and other leaders before the customary meeting with the country's president. This had originally been planned for Thursday but according to the Church source the generals had requested the meeting to take place on Monday thus ensuring they were the first to meet with Francis.