Parish that lost its flock records their memories

'For Christians and others who regard human life as having absolute value, this is a dangerous and disturbing piece of legislation' 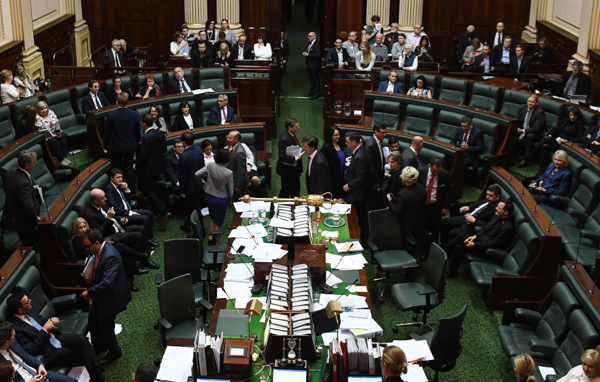 Victoria is on the brink of becoming the first Australian state to enact assisted dying for the terminally ill after the upper house of its Parliament ended a marathon debate with a 22-18 vote in favour of legislation that would introduce euthanasia from mid-2019.

The Legislative Council passed the Voluntary Assisted Dying Bill 22 votes to 18 on 22 November after a 28-hour continuous sitting, following a 47-37 vote in the lower house, the Legislative Assembly (Victoria’s version of the House of Commons), in October.

But the Bill needed amendments to be carried in the upper house, where the governing Labor Party has only 14 seats, and now must return to the Assembly, which passed it without amendment, for ratification. This is expected to be done next week, and then the Bill would be presented to Victorian Governor Linda Dessau for Royal Assent.

Melbourne’s Archbishop Denis Hart, the President of the Australian Catholic Bishops Conference, has yet to respond to the Bill’s passage but had been vocal in his opposition to the measure – joining the three other Victorian diocesan bishops in writing a pastoral letter to the State’s 1.4 million Catholics on 9 October outlining their concerns and earlier being a co-signatory to a plea from six other Victorian Christian leaders, including Melbourne’s Anglican Archbishop Philip Freier, for Victoria’s Premier Daniel Andrews to abandon the attempt to change the law.

Archbishop Freier described the Bill’s passage as “historic” and “a momentous social shift”, but one he could not celebrate.

“For Christians and others who regard human life as having absolute value, this is a dangerous and disturbing piece of legislation, though I acknowledge that proponents of the assisted dying legislation are sincere,” he said.

Mr Andrews said the legislation was “all about kindness and care, compassion and dignity”.

“It's about providing for those who have for too long been denied a compassionate end the control, the power over the last phase of their journey,” he said.

In all, the Victorian Parliament has spent more than 100 hours debating the legislation so far. In an earlier marathon sitting, debate in the Legislative Council was postponed when Labor MP Daniel Mulino – an opponent of the legislation – collapsed and was taken to hospital. He recovered and participated in this week’s debate.

On 16 November, similar legislation in the New South Wales Parliament fell at the first hurdle when defeated by one vote in its upper house.

Bishop Peter Comensoli of the NSW Diocese of Broken Bay, the Australian Bishops’ Delegate for Matters of Life, said the day after the NSW Bill’s defeat: “The Bill has been defeated in NSW, but the issue has not gone away. Euthanasia and assisted suicide are national issues being played out State-by-State. As debate on assisted suicide continues in the Victorian Parliament, I hope that they will be attentive to the decision of their NSW counterparts.”

He said that while all people were rightfully moved by personal stories of pain and suffering too often experienced by those they loved at the end of their lives, “none of us should think that a deliberate act of killing them is a genuinely human thing to do”.

“The trauma of pain and suffering that might emerge in people as they are dying, cannot be overcome by eliminating them. May our better impulse always be towards compassionate care and sacrificial accompaniment of those who are dying.”

In 1995, the Northern Territory (NT) Parliament in Darwin passed a law, the Rights of the Terminally Ill Act, enabling euthanasia but this was overturned by the national Parliament in Canberra, which can override laws in Australian territories, two years later. This is not an option for Canberra with state parliaments, such as Victoria’s. But NT Chief Minister Michael Gunner wrote to Prime Minister Malcolm Turnbull after the assisted dying legislation was carried by Victoria’s lower house asking Mr Turnbull to allow the NT to legislate for voluntary euthanasia.

PICTURE:Victoria's historic but contentious Assisted Dying Bill is heading back to the Legislative Assembly (pictured) for ratification of amendments after the upper house of the State Parliament, the Legislative Council, passed it in a modified form this week ©PA