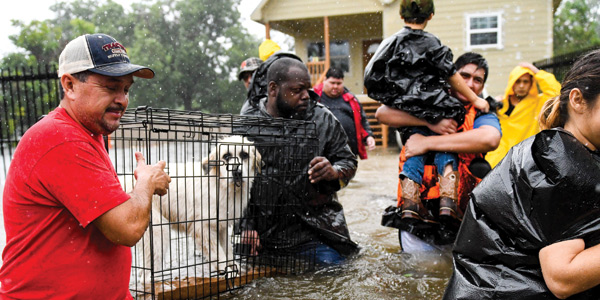 Pope sends message of support to victims of US floods 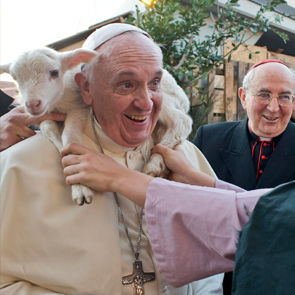 The future of the planet is under threat from humanity’s “insatiable desire” to manipulate the world’s limited resources, Pope Francis and the leader of Eastern Orthodox Christianity have said.

In a strongly-worded message the two Christian leaders come together for the first time to condemn what they say is a “morally decaying scenario” where corporate greed is destroying the natural environment.

“Our propensity to interrupt the world’s delicate and balanced ecosystems, our insatiable desire to manipulate and control the planet’s limited resources, and our greed for limitless profit in markets – all these have alienated us from the original purpose of creation,” the Pope and Ecumenical Patriarch Bartholomew write in their statement for the World Day of Prayer for Creation.

Their appeal comes at a timely moment, with the devastation caused by Hurricane Harvey in Texas and surrounding U.S. states have left at least 39 people dead and caused more than 30,000 to leave their homes.

At the same time, flooding in India, Bangladesh and Nepal has killed 1,200 and has left millions homeless. Coping with floods in some of these regions, however, is a regular feature of life for the poor.

“The human environment and the natural environment are deteriorating together, and this deterioration of the planet weighs upon the most vulnerable of its people,” Francis and Bartholomew explain. “The impact of climate change affects, first and foremost, those who live in poverty in every corner of the globe.”

What underlies the problem, the two Church leaders argue, is humanity’s alienation from the natural world; where creation is no longer seen as a shared gift but a private possession.

“We no longer associate with nature in order to sustain it; instead, we lord over it to support our own constructs,” they explained, adding that we should be “God’s co-operators” with creation.

This marks a shift that has occurred in Christian thinking on ecology: for years it was informed by the Genesis passage that God had given man “dominion” over the earth,  giving a free reign to use natural resources.

But in his landmark environment encyclical Laudato si’ Pope Francis rejects this argument and instead calls for a “deep communion” with nature where “mystical meaning” can be “found in a leaf, in a mountain trail, in a dewdrop, in a poor person’s face.” In this way, the Pope is re-connecting the Church with the 13th century spirituality of his namesake, St Francis of Assisi, who saw the created world as God-given gift, seeing the sun and moon as brother and sister.

Care for creation has been a key theme of Francis’ papacy: he’s been repeated calls for better global co-operation to tackle the problem while every world leader he meets in the Vatican is presented with a copy of Laudato si’.

For its part, the orthodox Church have been long time advocates for defending the environment with one of its leaders, Metropolitan John Zizioulas, taking part in the official launch of Laudato’ Si in the Vatican in 2015.

This has given further impetus to ecumenical co-operation between Catholic and Orthodox and they will hope their united front will make the world sit up and take notice.

“We urgently appeal to those in positions of social and economic, as well as political and cultural, responsibility to hear the cry of the earth and to attend to the needs of the marginalised, but above all to respond to the plea of millions and support the consensus of the world for the healing of our wounded creation” Francis and Bartholomew conclude.

“We are convinced that there can be no sincere and enduring resolution to the challenge of the ecological crisis and climate change unless the response is concerted and collective, unless the responsibility is shared and accountable, unless we give priority to solidarity and service.”