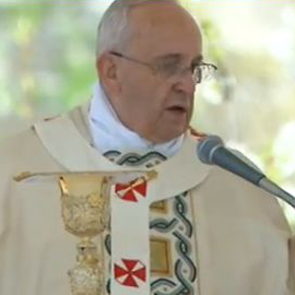 Pope prays for Syria, Nigeria and Ukraine in Easter message

Marseille Archbishop Georges Pontier, president of the French bishops’ conference, urged his fellow bishops to avoid being “manipulated by social movements” when he opened their spring plenary meeting.

The meeting in Lourdes just before Holy Week was overshadowed by different views about how to deal with a growing polarisation that emerged with last year’s anti-gay marriage protests, with some bishops actively supporting the protests but many others keeping a discreet distance. Some organisers of that lay-led movement have since become active in conservative and far-right politics.

Differences flared again last month when the bishops’ conference’s Family and Society Council withdrew a conference invitation to a feminist philosopher after a traditionalist blog collected about 1,100 signatures on a petition denouncing her as a proponent of gender theory, that is incompatible with Catholic doctrine. That led to an internal debate about whether the council should have caved in to what the Catholic daily La Croix called “a minority, promoted to be thought police”.

There was no official statement on the closed-door discussions but bishops’ conference spokesman Fr Bernard Podevin told Le Figaro the Lourdes debate was “a moment of truth” marked by “fraternity” but also “methodological disagreement”.

In his opening address, Archbishop Pontier diplomatically referred to the polarisation by urging “discernment” and stressing the Church’s message concerned both the life issues like abortion, family and euthanasia and social issues such as justice, sharing and support for immigrants. “The future can neither be in the promotion of eugenic behaviour nor in the perpetuation of an economic system that excludes too many members of our societies,” he said.

The archbishop also touched on the growing role of what French media call the “Cathosphere”, the social media that mobilised pro-family protests last year and are increasingly used by militant conservative Catholics. “Modern means of communication, the development of social networks sometimes marked by violence, irresponsibility and a refusal to dialogue have all profoundly modified individual and collective behaviours,” he said.

“We bishops are sometimes asked or even required to approve all sorts of initiatives. The risk of manipulating or being manipulated calls for discernment and discussion,” Archbishop Pontier said.

The latest incident highlighting differing views among Catholic officials was a visit to Moscow by a delegation of figures close to the anti-gay marriage movement, including Bayonne Bishop Marc Aillet, to discuss measures to protect the traditional family with leaders of the Russian Orthodox Church. They met Metropolitan Hilarion, head of external relations for the Russian Church, Russian parliamentarians and the Moscow Patriarchate’s commission on the family.