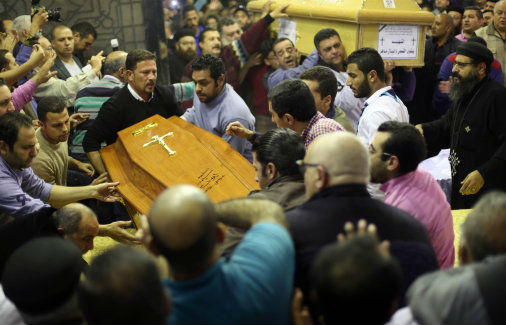 Egypt: 'Religious establishment not serious at all' about changing anti-Christian sentiment learnt in mosques

Bishop breaks down in 'uncontrollable tears' as he finds town wracked by 'death, hate, hunger, senseless killings and disarray'

As the slaughter of civilians in South Sudan's ethnically charged civil war escalates, the Catholic bishops’ conference has urged prominent leaders to condemn revenge killings, violence against civilians and hate speech, saying it is their ‘moral obligation to take action’.

"You have the strength, the power, the influence and obligation to use whatever you have at hand to solve the problems facing the people," Bishop Edward Kussala, president of the South Sudan Catholic Bishops' Conference, said in a letter to the elders of the Bahr el Ghazal region in the north west of the country.

Bishop Kussala said that the hatred and suffering he had witnessed on a March visit to a town in the region had brought him to "uncontrollable tears". Urging the elders "to recognise the urgency and gravity of the situation," the bishop described Wau, the town he had visited, as in a "critical situation" in the letter dated 6 April.

He said that he had found "death, hate, hunger, huge displacement, intolerance, empty and destroyed infrastructure, senseless killings and disarray" there.

"As one of the largest power blocs in South Sudan, also as elders of the region, you have a moral obligation to take action," he continued.

The bishop urged the elders to "allow room for people to speak out and listen," adding that probes into atrocities and holding perpetrators to account can be done later, but that what matters now is trying to stop the war.

The conflict in Syria is now genocide following tribal lines, the UK's International Development Secretary, Priti Patel said on 13 April, following her visit to the country this week.

“There are massacres taking place, people’s throats are being slit . . . villages are being burnt out, there’s a scorched-earth policy,” she told Associate Press in Uganda. “It is tribal, it is absolutely tribal, so on that basis it is genocide.”

Patel said that Mr Kiir’s government had “actively blocked and prevented aid access” to his own people. She accused him of using food as a weapon of war and said that on meeting with him on 11 April she had threatened consequences from the international community.

On 10 April – just days after the bishops' conference letter – at least 16 people were killed in Wau as government militiamen went from house to house searching for members of the local Luo and Fertit ethnic groups, according to witnesses.

The fighting followed an ambush that killed a brigadier general and a colonel in Wau state over the weekend, a rebel spokesman based outside of the country told Reuters.

"This morning the government forces were retaliating against innocent Fertit people," he said.

Just under 100 people are said to be sheltering in a civilian encampment protected by UN peacekeepers, while over 3,000 – largely women and children – have been moved to a site run by the Catholic church, a spokesman for the United Nations Mission in South Sudan (UNMISS) has said.

Likewise, thousands of residents from Pajok in South Sudan’s Equatoria region were forced to flee into northern Uganda after the previously peaceful town came under indiscriminate attack last week.

Many have witnessed their loved ones shot dead or slaughtered like animals," Rocco Nuri, UNHCR spokesman, told AFP news agency.

"Families fled in all directions. Those unable to run were reportedly shot dead, including the elderly and people with disabilities," he added.

A local pastor who fled Pajok said soldiers had entered the town in tanks "and suddenly we saw shooting and we just had to run".

UNMISS said in a statement on 4 April that it had twice been prevented from accessing the town.

"The mission has received reports of fighting between SPLA [government] troops and the opposition there and is trying to follow up on reports of civilians killed in the area," it said.

The UN peacekeeping mission urged the government to immediately allow it access "so it can fully implement its mandate, including to protect civilians and report on human rights violations".

Despite its 15,000 peacekeeping troops deployed throughout the country, the UN has been unable to prevent the continuing violence.

A UN report released last month said South Sudan is experiencing ethnic cleansing by mostly government forces and their allies. That report described the country as teetering on the edge of genocide.

In March, six aid workers and their driver were killed in the worst single attack on humanitarian staff in the country’s three-year civil war.

The aid workers, from a Unicef partner, Grassroots Empowerment and Development Organisation (Gredo), which works to support children released from armed groups, were in a vehicle marked as belonging to an NGO when they were attacked on 26 March. Four of the dead were South Sudanese and three were Kenyans.

The UN called the attack a “heinous murder of six courageous humanitarians”.

At least 79 aid workers have been killed in the country since December 2013 when fighting broke out following a dispute between President Kiir, who is Dinka, and former vice-president Machar, who is Nuer. The country has since collapsed into a brutal ethnic war, involving massacres, starvation and rape.