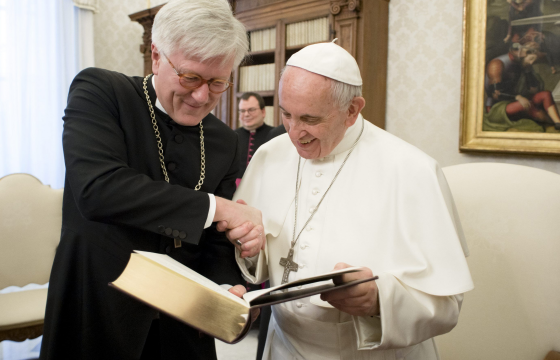 Five centuries after the start of the Protestant Reformation, leaders of the Catholic and Lutheran churches came together in a demonstration of unity to release new Bible translations.

At an ecumenical service at St Eberhard's Catholic Cathedral, in Stuttgart, Germanyt, clergy from both churches gathered to release revised German translations of the Catholic and Lutheran Bibles.

The release came as the 500th anniversary of the Reformation neared. It began in 1517 when theologian Martin Luther developed his 95 Theses challenging long-held Catholic practices.

Cardinal Reinhard Marx of Munich and Freising, president of the German bishops' conference, emphasized the sacred Scriptures as a strong bond shared by Catholics and Protestants.

"It is an effervescent fountain," Cardinal Marx said of the Bible. "The water drawn from it does not decrease, but increases. The more we debate the holy Scriptures, the more we experience the mystery of Christ."

During the last year, the Catholic and Lutheran translations of the Bible were subjected to thorough review and revision. A group of 200 people from both churches participated in the revision process.

"With the new translations, we remember our shared foundation - the sacred Scriptures - and together express our appreciation for each other's translation," said Lutheran Bishop Heinrich Bedford-Strohm, chairman of the Council of the Evangelical Church in Germany.

The Reformation, which sparked a religious war, left deep divides between Protestant and Catholics for centuries. In recent years both churches have come closer together. The release of the Bible translation is one of several ecumenical services being promoted by both churches throughout the year.

Bedford-Strohm also stressed the importance of the Bible as a shared foundation of Christian life, saying it is full of human stories of faith.

"Christian faith today means engaging in these stories, writing these stories into one's own biography and letting one's own life be reversed in unity with the great history of God with men and interpreting one's life in the light of this history," he said.

Leaders of both churches announced they will use the new Bible translations in future ecumenical services.

PICTURE - Pope Francis meets an ecumenical delegation from Germany, led by top Protestant Bishop Heinrich Bedford-Strohm, chairman of the Evangelical Churches in Germany on February 6, 2017 at the Vatican and is shown the Lutheran translation ahead of the mass at St Eberhard's Catholic Cathedral in Stuttgart