Rohingyas are good people, Pope Francis says. 'They are not Christians, they are peaceful people, and they are our brothers and sisters.' 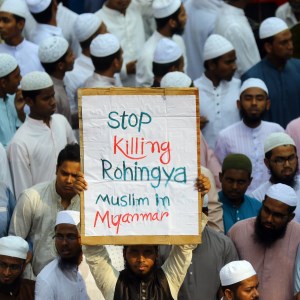 Pope Francis has issued a strong defense of the right of Burma’s Rohingya Muslims to ‘live their faith’, and criticised the country’s government for an alleged campaign of persecution.

The Pope said the Rohingyas have been tortured and killed “simply because they want to live their culture and their Muslim faith”, during an unprepared section of his weekly address.

He appeared to be referring to a UN report, issued last week, detailing grave violations allegedly carried out by members of Myanmar's security forces, or by civilians working alongside them.

Security forces in Myanmar reportedly burned down entire villages, and opened fire at people fleeing burning homes. According to the report, the army has also been accused of "massive and systematic rape and sexual violence; deliberate destruction of food and sources of food".

The Rohingyas are "good people", Pope Francis said. "They are not Christians, they are peaceful people, and they are our brothers and sisters."

He then urged the 7,000 people present in the Vatican's Paul VI Hall to join him in prayer for all migrants who have been exploited and humiliated, and in particular for the Rohingyas who, he said, "are being chased from Myanmar and are fleeing from one place to another because no one wants them".

Human rights groups say the military operation against the Rohingya - previously described by the UN as “the most oppressed people on earth” - has been abusive enough to be categorised as crimes against humanity.

Myanmar denies carrying out atrocities against the Muslim minority, consisting of around 1.2 million people in the northern Rakhine state who are regarded as illegal immigrants from Bangladesh, even when their families have lived in the country for generations. As a result, they are refused citizenship of any country.

PICTURE: Bangladeshi activists of several Islamic groups shout slogans during a protest rally against the persecution of Rohingya Muslims in Myanmar, after Friday prayers in Dhaka on November 25, 2016