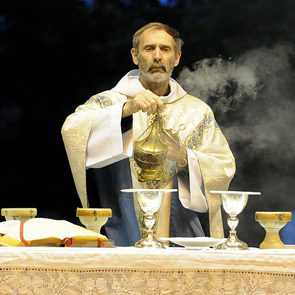 Walsingham director to succeed McMahon as bishop of Brentwood

by Liz Dodd in Trivandrum, Kerala

Christians in southern India have been urged to boycott the Hindu nationalist party, the BJP, in the country’s parliamentary elections in an unprecedented pastoral letter from church leaders including the Archbishop of Hyderabad, Thumma Bala.

The letter to Christians in southern state of Andhra Pradesh, India’s fifth most populous, was read in hundreds of churches on Palm Sunday and will be read out again before polling begins there on 30 April.

In the letter, the Andhra Pradesh Federation of Churches (APFC), an ecumenical council of bishops and church leaders, called on Christians to “elect leaders who are close to people and their needs, and only vote for those who uphold secular character and promote communal harmony”.

The letter was signed by Archbishop Thumma Bala and the moderator of the Church of South India, Anglican Bishop Govada Dyvasirvadam.

The NDA is currently leading the election and is the major non-secular party. All Christian and Muslim parties are considered secular, and most Christians and Muslim voters support the incumbent Congress party led by Rahul Gandhi.