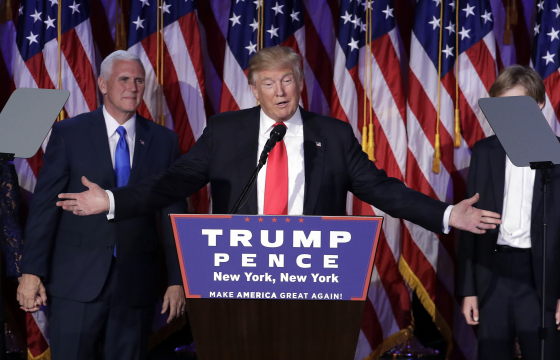 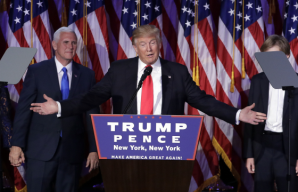 America is waking up to the prospect of a wall from the Pacific to the Atlantic oceans splitting the continent in two, built by a new president who has no qualms in picking a fight with the Pope, has vowed to rip up the previous incumbent's much maligned healthcare insurance scheme, and the very real prospect of a Supreme Court bench sometime in the future having an opposite view of Roe v Wade for the first time.

Donald Trump has been elected as the 45th president of the United States. Hillary Clinton phoned the property tycoon as the sun came up on New York city and conceded an election that just a week ago looked hers for the taking. In the end it was Trump's ability to rip up the rule book and campaigning and appeal to a section of America that has been largely disregarded by politicians - the white working class and lower middle classes.

His party - whose death had been long predicted and expected throughout the election campaign - also kept control of the House of Representatives and the Senate in a clean sweep of the three branches of legislative power.

The sizeable Catholic section of this group, Pew Research has confirmed, has been quietly backing the president elect - partly because of his pro-life stance and his broad alignment to Republican values, but maybe more perhaps for negatives like the revelation that Trump's Democrat rival Hillary Clinton's camp viewed the Catholic vote as a block to be manipulated.

Research done by the Institute for Policy Research and Catholic Studies published a week before the poll, showed that Clinton's firm grip on the Catholic vote - which makes up a fifth of the electorate - showed signs of slipping: her support from hispanic and black Catholics remained strong but white Catholics were turning to Trump in sizeable numbers. Before the email scandal surfaced Trump was already 9 points ahead of her among white Catholics.  70 per cent of the US electorate is white.

Also that large section of Catholics that were expected to keep Trump, 70, out of the White House - the Hispanics - failed to rally behind Clinton: there was only a 1 per cent increase of Hispanics casting a ballot last night compared to four years ago - a significant drop from what was expected by experts.

At the end of a long night, president-elect Trump in his acceptance speech in New York this morning attempted to draw a line under a bitter divisive election campaign: instead of calling for Clinton to be thrown in jail he praised his rival for her tireless work for America and how hard she fought during the campaign.

"For those of you who have chosen not to support me - and there are a few - I am reaching out to you for your guidance and your help so we can work together and unify our great country again," Trump said. "Now it’s time for America to bind the wounds of division. We have to get together. To all Republicans and Democracts and Independents across this nation, I say it is time for us to come together as one united people. It’s time.

"I pledge to every citizen of our land that I will be president for all Americans and this is so important to me. It will be a movement comprised of people from all races, religions, backgrounds and beliefs who want and expect our government to serve the people - and serve the people it will.

"Working together we will begin the urgent task of rebuilding our nation and renewing the American dream."

In a break from tradition, the loser did not speak first: Clinton went home early and called Trump to concede. She has not been seen in public since she turned out to vote in her home in New York state earlier in the day. President Barack Obama is also yet to release a statement.

Meanwhile, the world sat stunned into silence. World leaders have been largely silent barring a telegram from Russian president Vladimir Putin and a brief message from an aide to the German chancellor Angela Merkel the only words spoken in reaction to the election of Trump. Another world leader who is happy to pick a fight with the Pope, Philippine president Rodrigo Duterte offered his "warm congratulations".

The Vatican, too, has remained silent though perhaps Pope Francis said all he intended to say at prayers before voting started yesterday morning:"This desire for power is not the path to becoming a servant of the Lord," the pope said. "On the contrary, it is an obstacle; it is one of these obstacles that we have prayed to the Lord to keep far from us."