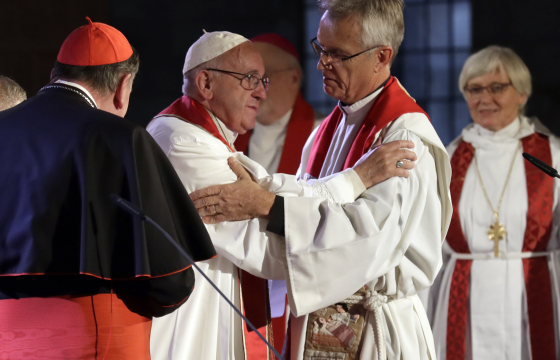 by Christopher Lamb , in Sweden 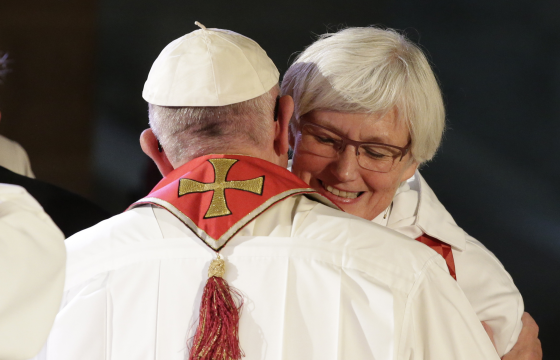 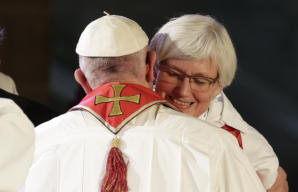 Pope Francis today praised Martin Luther in what were the most positive remarks made yet by a pontiff about a man excommunicated following his attempts to root out abuses within the Catholic Church. He made the comments during a special joint Catholic and Lutheran prayer gathering in Lund, Sweden where the two churches pledged to end half a millennium of division.

“With gratitude we acknowledge that the Reformation helped give greater centrality to Sacred Scripture in the Church’s life,” Francis said in the 11th century Lutheran Cathedral in a service marking 500 years since the birth of the Reformation. “The spiritual experience of Martin Luther challenges us to remember that apart from God we can do nothing.”

He added: “With the concept of ‘by grace alone,’ he [Luther] reminds us that God always takes the initiative, prior to any human response, even as he seeks to awake that response. The doctrine of justification thus expresses the essence of human existence before God.”

Luther, who was an Augustinian friar, wanted to end the Church’s practice of selling indulgences stressing that Christians found salvation through faith not works: his ideas got him excommunicated by Pope Leo X, led to religious wars and the founding of Protestant churches.

Today the Pope and fellow church leaders asked for repentance of past divisions with Francis and the Lutheran World Federation’s president, Bishop Munib Younan signing a joint statement committing themselves to the path of unity. On board his flight from Rome to Malmo this morning the Pope explained his visit to Sweden was an important ecumenical visit and in Lund today urged Catholics and Protestants to follow a “common path”.

But while Luther’s theological complaints have been ironed out in recent decades, divisions between Catholics and Lutherans still exist, mainly over gays and women’s ordination. The Catholic Church officially remains resolutely opposed to female priests although the Pope today embraced Archbishop Antje Jackelén, the leader of the Lutheran church in Sweden.

The divisions between the churches mean that Catholics and Lutherans are prevented from receiving communion in one another’s churches, although Francis has shown an openness to Lutherans married to Catholics being admitted to the eucharist. Today the Pope steered clear of the subject but Rev Martin Junger, the general secretary of the Lutheran World Federation, said God wanted the two churches to share “tables - yes tables - where we can share bread and wine, the presence of Christ”. In their joint declaration, Catholics and Lutherans acknowledged their "joint pastoral responsibility" to those who wanted to receive communion in one another's churches, although stopped short of specifics.

The joint prayer service this afternoon was an eclectic, international and colourful gathering where Swedes and Africans sat next to each other in traditional dress. And alongside assorted choirs of young people they sang hymns from France, Botswana, Argentina and England.

Francis wore a simple red stole during the service and processed in behind a specially designed two metre high Salvadoran Cross which deputed God as “creative, reconciling and sanctifying.”

Later this afternoon the Pope will take part in an event in Malmo marking the Catholic and Lutherans joint work helping refugees and at the end the two churches’ charitable agencies - Caritas Internationalis and LWF World Service - will sign a pledge to work more closely together.

This morning Francis met with the Prime Minister of Sweden, Stefan Lovfen, and made a courtesy visit to see the Swedish royal family. He returns to Rome tomorrow afternoon after saying Mass for the Catholic community.