Pope warns journalists not to use their trade as a weapon

Pope cracks down on cash payments in miracle approval process 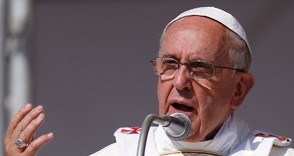 Pope Francis today announced a toughening up of the miracle approval process for potential saints, ruling that a near unanimous agreement of medical experts was needed and that they cannot be paid for their services in cash.

The latest changes, announced by the Vatican today, state that five out of seven - or four out of six - medical experts must agree that a miraculous cure has taken place while a possible one cannot be assessed more than three times.

Remuneration for the medical advisers, the rules added, should be made only by bank transfer, in an attempt to bring more transparency to the saint-making process which, according to some estimates, costs as much as €500,000.

The banning of cash payments came on the same day the Holy See announced it had signed the United Nations convention against corruption designed to clamp down on bribery, embezzlement and money laundering, in what is another sign of the Pope’s determination to clean up the Vatican.

The process to declare someone a saint has been subject to controversy recently with leaked documents in the latest Vatileaks scandal revealing that millions of euros involved in canonisation causes had been left unaccounted for.

In his book based on leaked Holy See documents, Italian journalist Gianluigi Nuzzi revealed that a commission set up in 2013 by Pope Francis froze the accounts of almost everyone involved in the work of choosing saints including one postulator who had more than €1 million spread out among three Vatican bank accounts.

But today Paloma Ovejero, the Deputy Director of the Vatican Press Office, told journalists that medical experts will be paid a total of €3,760 which works out as just over €500 each for their work in assessing a potentially miraculous cure. Before the group meet two experts undertake preparatory work looking at a case and submit a report. And the president of the group examining the cures can only serve two five-year terms of office.

Catholic reformers have also raised questions about the need for two miracles to be approved by the Vatican in order to declare an individual a saint, with many feeling it unnecessary and theologically dubious.

Countering such views, Archbishop Marcello Bartolucci, the secretary of the Vatican’s saint making department, stressed that the miracles of saints are the "finger of God” and ratify “the human judgment of their holiness.”

He stressed, however, that the process for approving miracles must be robust.

“It is necessary that their study is carried out with serenity, objectivity and competence on the part of highly skilled medical experts,” he wrote in an article in the Vatican newspaper L’Osservatore Romano published today.

An approval of a miracle by medical experts is only one step on the road to sainthood: cures also need to be approved by a panel of theologians and the Pope himself. It has been known for popes to block a cause where a miracle has earlier been approved.

And while the new regulations are sign of greater transparency, they continue to demand the traditional requirement of secrecy for all those involved in assessing miracles.