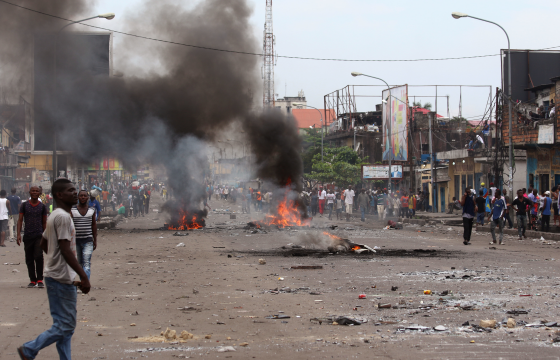 Great sickness of our time is inertia, Francis tells gathering in front of the Basilica of St Francis 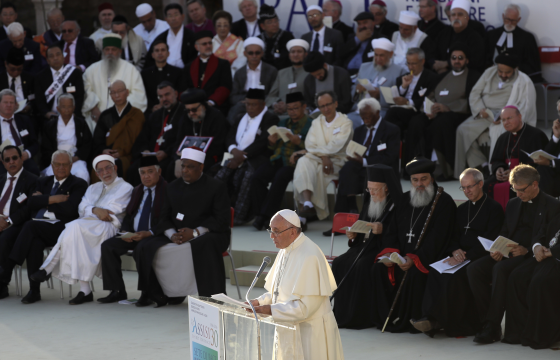 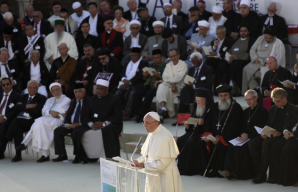 It is the “paganism” of indifference rather than religious conflict that is proving the major obstacle to bringing about world peace, Pope Francis told an interfaith prayer meeting in Assisi today.

Speaking at a gathering in the hilltop town of his namesake St Francis, the Pope said the “great sickness of our time” was inertia where victims of war are silenced by the powerful with the ease of switching a television channel.

The event in Assisi saw Christian, Muslim, Jewish, Buddhist and Zoroastrian leaders gather to pray for peace with the church leaders taking part in an ecumenical service while other religious representatives praying in nearby locations.

It was a colourful and moving occasion where Ennio Morricone’s music from The Mission film played as religious representatives from across the globe lit candles and signed a declaration dedicating themselves to building peace.

Francis stressed that the joint prayer witness in the “city of peace” showed religions were united in trying to end global conflicts - and should not be blamed for causing them.

“Our differences are not the cause of conflict and provocation, or a cold distance between us,” the Pope said in front of religious leaders during the concluding ceremony for the World Day of Peace. “We have not prayed against one another today, as has unfortunately sometimes occurred in history. Without syncretism or relativism, we have rather prayed side-by-side and for each other.”

Francis stressed, however, that religious leaders should free themselves of fundamentalism and hate stressing: “we never tire of repeating that the name of God cannot be used to justify violence. Peace alone, and not war, is holy.”

The real problem, he explained, was indifference which he described as a “paganism” and stops people trying to ending wars.

“It is a virus that paralyses, rendering us lethargic and insensitive, a disease that eats away at the very heart of religious fervour, giving rise to a new and deeply sad paganism,” said Francis.

“We cannot remain indifferent. Today the world has a profound thirst for peace. In many countries, people are suffering due to wars which, though often forgotten, are always the cause of suffering and poverty.”

The Pope explained that religions had a duty to build dialogue and that leaders should be “creative mediators of peace,” something the Pope has done in Colombia and the Central African Republic.

“Our path leads us to immersing ourselves in situations and giving first place to those who suffer; to taking on conflicts and healing them from within,” he explained.

The event, organised by the Catholic humanitarian group the Community of Sant’Egidio, marks 30 years since John Paul II gathered 160 religious leaders to pray for peace, an event which has gone down as one of the remarkable acts of his papacy.

Today, the leader of the Sant’Egidio community, Andrea Riccardi, described war as the “mother of poverty” citing Syria in particular: his community has helped give asylum to those left homeless by the country’s civil war and arranged for the Pope to rescue twelve Syrian refugees from the Greek Island of Lesbos.

Francis travelled to Assisi by helicopter this morning and was welcomed by religious leaders including the Archbishop of Canterbury, Justin Welby and Ecumenical Patriarch Bartholomew, the Chief Rabbi of Rome, Riccardo Di Segni and Dr Abbas Shouman, the deputy president of Egypt’s Al-Azhar university.

Francis had lunch with the leaders along with 12 refugees who had been victims of war including three Syrians who had fled the city of Aleppo, Palestinians, Eritreans and a Nigerian.

During the prayer service in Assisi’s lower basilica, the Pope said that such victims were calling for peace but too often their appeal fell on deaf ears.

“Our brothers and sisters, who live under the threat of bombs and are forced to leave their homes into the unknown, stripped of everything, plead for peace,” he said.

“But they are frequently given, like Jesus, the bitter vinegar of rejection. Who listens to them? Who bothers responding to them? Far too often they encounter the deafening silence of indifference, the selfishness of those annoyed at being pestered, the coldness of those who silence their cry for help with the same ease with which television channels are changed.”

The service also heard from Archbishop Welby who stressed that the world had become deceived by an “imaginary economy” where the true riches of God’s mercy were disguised. The archbishop said that despite spending money Europe had built only “sandy foundations’ which had led to family breakdown, inequality and rise of extremism.

“Riddled with fear, resentment and anger, we seek ever more desperately, fearing the stranger, not knowing where to find courage,” the archbishop said.

At the end of the day the Pope called on world leaders to look beyond “particular interests” to end conflicts and “not remain deaf to God’s appeal to their consciences.”

At the end of the day the leaders of different religions stood together and prayed silently before they signed a declaration of peace which was handed to children from different parts of the world.