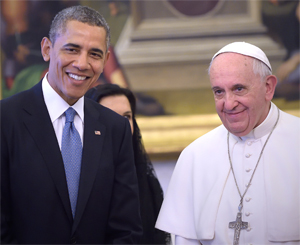 US President Barack Obama and Pope Francis in their first meeting today discussed international conflicts and the importance of humanitarian and international law, as well as issues of poverty and injustice.

According to the Vatican, "the Parties discussed questions of particular relevance for the Church, such as the exercise of the rights to religious freedom, life and conscientious objection."

In a meeting afterwards, the Vatican’s Secretary of State Cardinal Pietro Parolin raised the Church’s concern over the President’s controversial healthcare legislation that requires health insurers and employers to cover contraceptive costs in their insurance plans. It has drawn sustained criticism from the American bishops, who have objected to the legislation on the grounds of conscience and freedom of religion.

In an unusually long – 50-minute – discussion, Pope Francis and Mr Obama spoke about challenges to world peace and justice for the poor and areas of shared concern such as immigration reform and a commitment to ending human trafficking.

Pope Francis could “open people's eyes to inequality”, Mr Obama told a press conference after the meeting, but said it was his responsibility as President to come up with policies that would address injustice.

He said Pope Francis was “hopefully creating an environment in which those of us who care about this [inequality] are able to talk about it more effectively.”

Mr Obama said that he did not discuss the healthcare act with Pope Francis, but said he assured Cardinal Parolin afterwards that he would continue to dialogue with the US Conference of Bishops over the issue.

The President also said he had “urged” Pope Francis to visit the US.

The Vatican’s statement added: “During the cordial meeting, views were exchanged on some current international themes and hope was expressed that, in areas of conflict, there would be respect for humanitarian and international law and a negotiated solution between the parties involved.”

Ahead of the meeting the president of the US bishops’ conference, Archbishop Joseph Kurtz, issued a statement praising Secretary of State John Kerry for his efforts to bring about peace between the Israelis and Palestinians. Pope Francis is going to the Holy Land in May.

After their meeting Francis gave Mr Obama two medallions and a copy of Evangelii Gaudium, the strident exhortation in which he condemns economic regimes that keep people in poverty.

According to American news network NBC the Pope handed him the book saying in Spanish: “This, for when you are bored.”

Obama replied: “You know, I actually will probably read this when I'm in the Oval Office [of the White House in Washington DC], when I am deeply frustrated, and I am sure it will give me strength and will calm me down."

The US President presented the Pope with a seed-chest made out of reclaimed wood from one of the oldest Catholic cathedrals in the US, the Baltimore Basilica, and filled with a variety of fruit and vegetable seeds used in the White House garden. 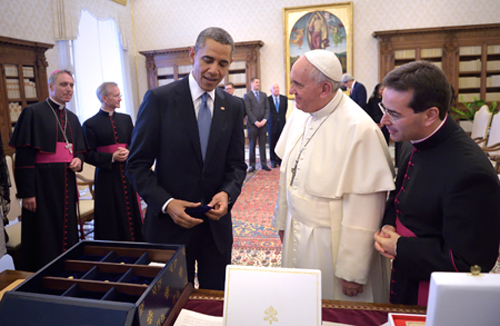 Mr Obama, who met the Pope Emeritus Benedict XVI in 2009, was accompanied by the US Secretary of State, John Kerry and the US Ambassador to the Holy See, Kenneth Hackett.

Earlier this week the most senior American in the Vatican hit out at Mr Obama, charging that he "appears to be a totally secularised man who aggressively promotes anti-life and anti-family policies".

Speaking to the Catholic television station EWTN, Cardinal Raymond Burke, Prefect of the Apostolic Signatura, said Mr Obama’s policies “have become progressively more hostile toward Christian civilisation” and that the Catholic Church has become too “timid regarding its solemn duty to defend the truth in the public forum”.