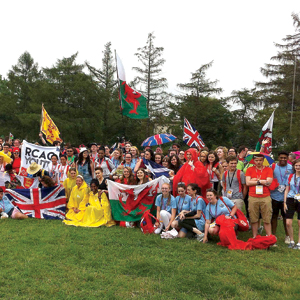 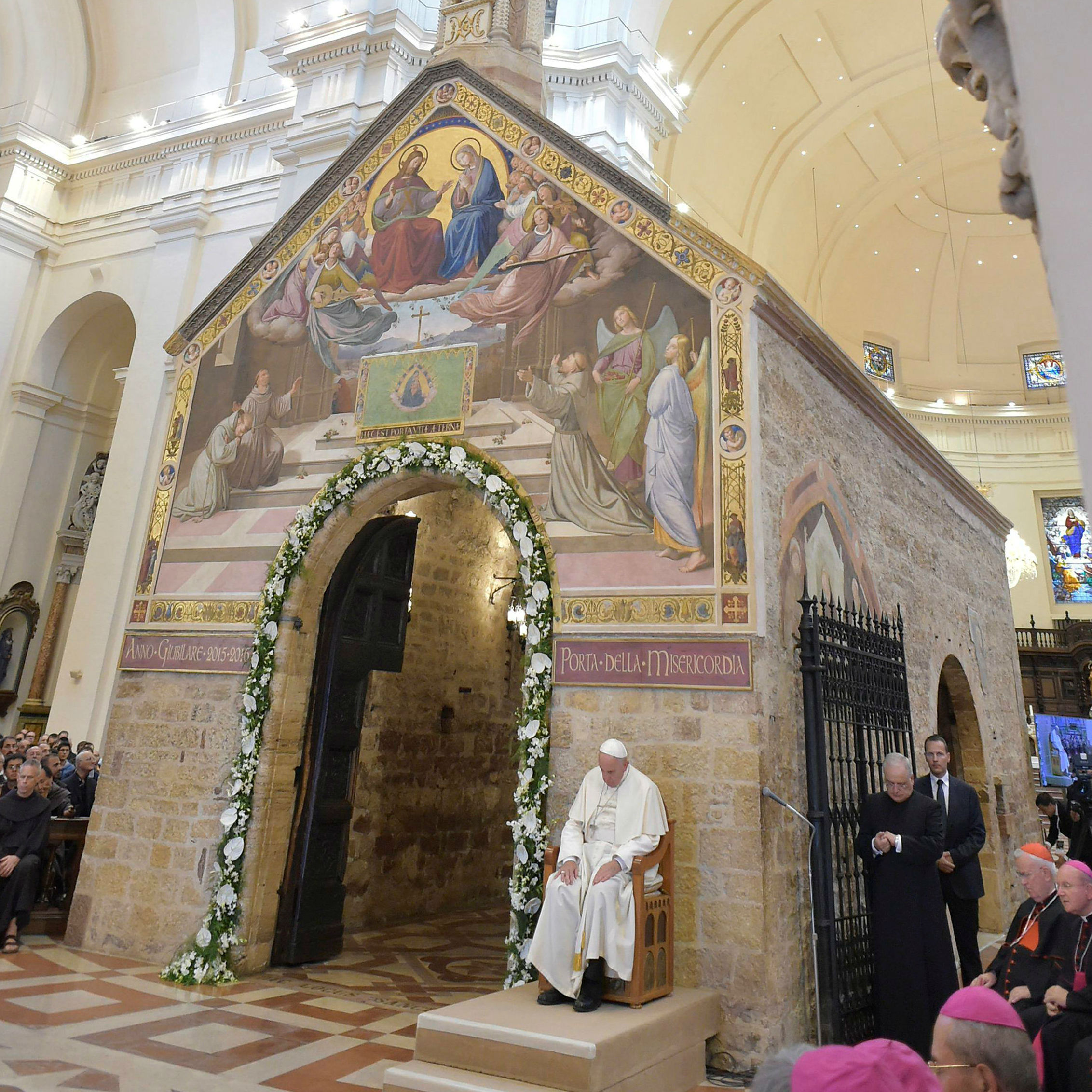 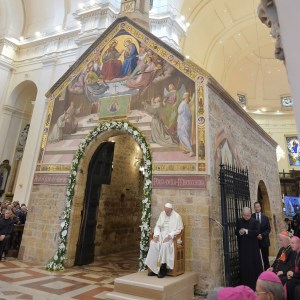 Pope Francis has visited Assisi, central Italy, to mark the 800th anniversary of the Franciscan feast of the Pardon of Assisi.

Francis marked the feast with a pilgrimage to the Porziuncula chapel in Assisi’s Basilica of Mary of the Angels, where the feast originated. After praying silently in the chapel, Francis moved into the main basilica to offer a reflection on Matthew 18.21-35. In this Gospel passage, Christ tells Peter to forgive his brother “not seven times, but seventy times seven”, before telling the parable of the servant who was forgiven his debt, but refused to forgive his own debtor.

Pope Francis began his reflection by echoing the words St Francis is believed to have said in the same basilica: “I want to send you all to Heaven!”

He said that “forgiveness” is “our direct route” to Heaven – being forgiven by God and in turn forgiving others. He compared the indebted servant in the story to a penitent coming to confession, asking that his Master have patience with him.

“When we are indebted to others, we expect mercy,” he said, “but when others are indebted to us, we demand justice! This is a reaction unworthy of Christ’s disciples… who have obtained mercy at the foot of the cross solely by virtue of the love of the Son of God.”

He closed the reflection by urging all Christians “to offer today’s world the witness of mercy”. “In this Holy Year of Mercy,” he said, “it becomes ever clearer that the path of forgiveness can truly renew the Church and the world… The world needs forgiveness; too may people are caught up in resentment and harbour hatred, because they are incapable of forgiving. They ruin their own lives and the lives of those around them rather than finding the joy of serenity and peace.”

Assisi is of special significance to Pope Francis; it is the hometown of the saint whose name Cardinal Jorje Bergoglio took on his election to the papacy, the first Pope to do so.

The Holy Father last visited on 4 October 2013, seven months after his election as Pope, to mark St Francis’ Feast Day. On that occasion, the Pope seemed to foreshadow his 2015 Encyclical Laudato Si'. Speaking to the faithful in St Francis’ Square, he quoted the opening of St Francis’ Canticle of the Creatures, “Praised may you be, Most High, All-Powerful God… by all your creatures”, which gave the Encyclical its title.

He went on to urge, “Let us respect creation, let us not be instruments of destruction… May the clash of arms be silenced; and everywhere may hatred yield to love, injury to pardon, and discord to unity.”

The Pardon of Assisi, which this year’s visit commemorates, is an indulgence offered to all pilgrims who walk through the door of the Porziuncula chapel. According to tradition, on 1 August 1216, St Francis was praying in the chapel when he had a vision of Christ and His Mother, surrounded by angels. Christ asked St Francis what he wanted in order to save souls, and in response, Francis asked God to grant a plenary indulgence – remission of the temporal punishment of all their sins – to all pilgrims who visited the church.

Christ granted his request on condition that Francis gain the approval of Pope Honorius III, which he obtained the following day. The feast of the Pardon of Assisi has been celebrated by the Franciscans on 2 August ever since.

As part of his visit, Pope Francis is due to meet Franciscan bishops and superiors and greet pilgrims in the piazza outside the Basilica of St Mary of the Angels. He will return to the Vatican by helicopter.