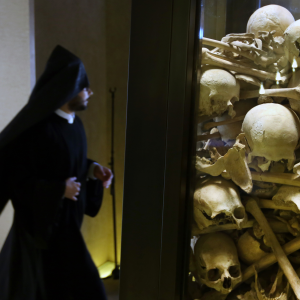 It has become one of the most regular events of the papal calendar: a visit by the Archbishop of Canterbury to the Pope. But in 1966, Anglican-Catholic relations took a huge leap forward when Archbishop Michael Ramsey visited Pope Paul VI.

The meeting on 23 March 1966 led to a half-century of ecumenical dialogue through the formation of the Anglican Roman Catholic International Commission (Arcic) and the setting up of the Anglican Centre in Rome. The Centre was dedicated on 22 March and opened a few months later. A series of events have been set up to marks its fiftieth anniversary. On Tuesday 22 March, there will be a Holy Communion service  in London at St Andrew by the Wardrobe, where the preacher will be Revd Barry Nichols, secretary and former governor of the Anglican Centre, and on the same day a Eucharist service in Rome at the Anglican Centre. Bishop Stephen Platten, the chairman of governors, will preach and use the original order of service used by Archbishop Ramsey to rededicate the Centre’s chapel. In June, ecumenical Evensong will be held at Westminster Abbey to mark the anniversary with the sermon preached by the Archbishop of Canterbury, Justin Welby.

Michael Ramsey and Paul VI first met in the Sistine Chapel, where they exchanged gifts and gave formal addresses. They then met for private talks in the pope’s library and the following day both participated in a service at St Paul Outside the Walls. The pair made a common declaration and, impromptu, Paul VI took off his ring and handed it to Michael Ramsey, who burst into tears. Since then, the ring has always been worn by Archbishops of Canterbury whenever they visit Rome. Robert Runcie visited five times, George Carey six, Rowan Williams a remarkable eight, and Justin Welby twice so far, with another meeting between him and Pope Francis pencilled in for October.