Benedict XVI ‘was prevented from dealing with Maciel’ 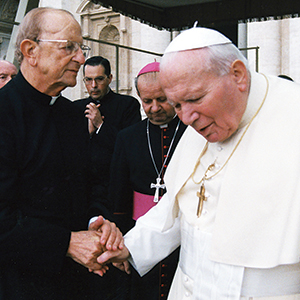 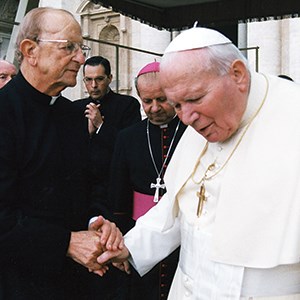 Benedict XVI made strenuous efforts to clean up one of the Church’s worst abuse scandals, Pope Francis has said, while hinting that his predecessor was prevented from taking tougher action.

During an in-flight press conference returning home from Mexico, Francis was asked about the case of Fr Marcial Maciel, the Mexican founder of the Legionaries of Christ, who sexually abused numerous seminarians.

He was also a drug addict, maintained relationships with two women and fathered up to six children, two of whom he was  accused of abusing.

Despite this, he founded a successful and extremely wealthy religious order, which included a lay branch, Regnum Christi, and was close to Pope John Paul II and senior figures in the Vatican.

Allegations of abuse were investigated by the Congregation for the Doctrine of the Faith, then led by Cardinal Joseph Ratzinger during John Paul II’s papacy. After he was elected Pope, Benedict XVI removed Fr Maciel from public ministry, ordering him to live a life of prayer and penance. But there have been numerous reports that senior figures in the Vatican protected Fr Maciel.

Speaking on the plane Pope Francis hinted at this, saying: “Cardinal Ratzinger deserves an applause. He’s a man who as the Prefect of the Congregation for the Doctrine of the Faith had all the documents, he had everything in his hands, he conducted all the investigations, and went on, went on, went on, until he couldn’t do more. He was not able to continue up to the end.”

Francis added: “He was the brave one who helped so many open this door. I want to remember him because sometimes we forget about these hidden works.”

But John Paul Lennon, a legionary for 23 years and now co-editor of the ReGAIN network for former members of the order, told The Tablet that Maciel, who was never laicised, “did not receive the punishment he deserved”. This, he added, could be interpreted as “Benedict’s weakness”.

He explained that several researchers have shown that Maciel formed an alliance with Cardinal Angelo Sodano, former Secretary of State, a powerful figure under the papacy of St John Paul II and to some extent that of Benedict XVI.

“Fr Maciel, an astute manipulator, knew that the best way to protect himself from accusations was to make friends in high places,” Lennon said. “As the noose tightened around Maciel, Vatican officials were told that he was ‘a friend of His Holiness’ and, as such, basically untouchable. However, Ratzinger, once pope, was able to bring to conclusion the 2004-5 investigation which led to the May 2006 ‘condemnation’ of Fr Maciel.”

During his time in Mexico Pope Francis made no public mention of Maciel.

The Legionaries still retain influence in the Vatican. This week it emerged that two legionary priests are leading a cruise around Italy, Croatia and Slovenia for donors to the Vatican museums. The cruise for “Patrons of the Arts in the Vatican Museums” costs up to US$6,550 (£4,670) with an optional US$2,799 (£1,996) for a three-day Rome excursion.

Elsewhere during the press conference, the Pope defended John Paul II’s friendship with Anna-Teresa Tymieniecka, a married Polish philosopher with whom he exchanged intimate letters.

Francis said: “I would also say that a man who does not know how to have a good relationship of friendship with a woman – I’m not talking about misogynists, these are sick – he’s a man who is missing something.”

The Pope was also asked about the use of contraception in preventing the spread of the Zika virus, which he suggested would be permissible. “Avoiding pregnancy isn’t an absolute evil,” he said. “Abortion is an absolute evil.”