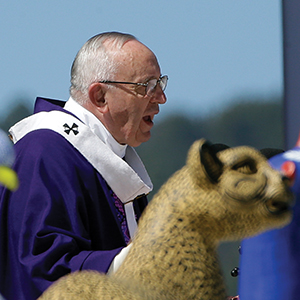 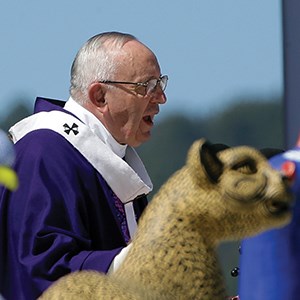 On a six-day trip to Mexico in which he addressed and encountered the most severe and scandalous problems that blight the lives of so many Mexicans, Pope Francis nevertheless insisted that the country could and should be made into one in which people wanted to stay.

The last stop on his tour, Ciudad Juárez on the border with the United States and across the river from El Paso, Texas, encapsulates the desperation to leave the country on the part of hundreds of thousands of especially young people, crossing if they can to find the greater security and opportunity available even to illegal immigrants in the US.

What they leave behind are whole regions suffering under the domination of drug cartels – and the consequent pressure to cooperate with or work for them – and a level of corruption that is daunting for anyone attempting to live a “regular” life, raising and supporting a family.

Francis acknowledged throughout his tour how the twin scourges of drugs and corruption rule out that option of “normality” for millions, and expressed solidarity with would-be migrants. At the same time he insisted that Mexico could be made into a land where aspirations to legitimate employment for fair wages, to decent housing, and to an environment free of crime, were attainable.

After a Mass last weekend in Ecatepec, close to Mexico City, one of the country’s poorest and most dangerous shanty towns, the Pope urged the faithful to  “make this blessed land of Mexico a land of opportunities”.

It should be a country where, he said, there is “no need to emigrate in order to dream, no need to be exploited in order to work, no need to make the despair and poverty of many the opportunism of a few”. He went on to denigrate drug traffickers, whom he called “the dealers of death” that destroy lives. Ecatepec in particular is notorious for the number of women who have disappeared and been murdered in recent years; human trafficking and prostitution is one of its most entrenched social problems.

During the Mass the Pope also warned against the sinful use of money and material goods saying that bread earned through corrupt means “tastes of pain, bitterness and suffering”. Bishop Oscar Domínguez Couttolenc of Ecatepec told the Pope that “like many other places, we experience poverty and violence, made flesh in the pain of those who suffer because of corruption, hunger, poverty and all the manifestations of evil that lead to the deterioration of our common home”.

Francis also made ample references as anticipated, and particularly in Chiapas, to the value of indigenous cultures, and what they could offer the Church. However, notable by its absence was any public reference, as had also been anticipated, to the disgraced Mexican founder of the Legionaries of Christ, Marcial Maciel. The priest died in disgrace in 2008, accused of sexually abusing minors and fathering six children with three women.

In 2006 Benedict XVI instructed Maciel to retire to a life of “prayer and penitence”. The fact that the Pope did not attempt openly to heal the raw wounds left behind by Maciel will have disappointed many, although it was likely that if he gave a press conference on  plane home – he was to leave for Rome after The Tablet went to press – then questions about Maciel would have been asked.