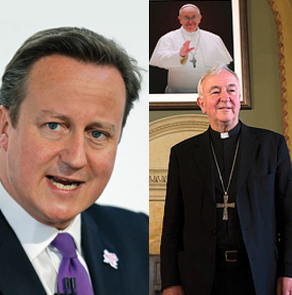 CofE bishops and other Churches back Nichols in welfare reform row

Christ is uniting us, says Welby as Catholic and Lutheran move in

The Archbishop of Canterbury today welcomed members of the Catholic-founded ecumenical community Chemin Neuf to Lambeth Palace, describing their contribution to religious life there as an important and profound step for relations between the Catholic and Anglican Churches.

The four members of the international community – a Polish Catholic sister, a German Lutheran in training for ministry and a married Anglican couple – moved into the palace last month at Archbishop Welby's invitation. They will hold daily prayer and worship services.

Speaking before a service of thanksgiving and dedication in the chapel at Lambeth Palace today, Archbishop Welby said that the process of bringing the two Churches together would advance "one step at a time".

"This is an important ecumenical step and a profound one. There is a sense that Jesus Christ is bringing us together to pray together," he said.

Chemin Neuf is a Catholic foundation with an ecumenical vocation, consisting of men and women, married and single, some of whom take lifetime vows and others who commit for a shorter term. Its members come from different Christian denominations.

The Archbishop's Chaplain, Dr Jo Wells, said that Chemin Neuf helped to prepare services and provided music at Lambeth. "It's fantastic to have them among us here. They help to sustain the sense of worship between our bursts of prayer," she added.

Three services a day are held in the Crypt Chapel at Lambeth Palace, in the heart of London.

Sr Michlowicz, the Catholic member of the community, said: "I love praying in the Crypt. It is like being part of an underground prayer stream overflowing into Lambeth Palace, to the city of London, to all these places we're praying for."

Chemin Neuf is also due to take over the running of Christ the King Catholic parish in Cockfosters, north London.