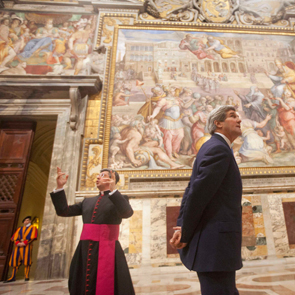 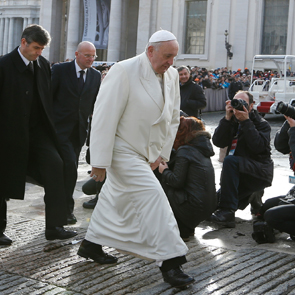 Pope Francis has sacked four cardinals – including former Secretary of State, Cardinal Tarcisio Bertone SDB – from a five-member commission that oversees the activities of the scandal-hit Vatican bank.

All but Calcagno were only eleven months into a second, five-year term, an appointment Benedict XVI made just 12 days before he resigned.

Pope Francis has replaced the men on what is formally called the Commission of Cardinals overseeing the Institute for the Works of Religion (IOR) with Cardinals Christoph Schönborn (Vienna), Thomas Collins (Toronto); Santos Abril y Castillo´ (St Mary Major) and Cardinal-designate Pietro Parolin (Secretary of State).

The members of the commission are to elect a president in the coming days when it holds its first meeting. Cardinal Bertone has been president until being replaced.

Above: the Pope arrives for his general audience today. Photo: CNS/Paul Haring