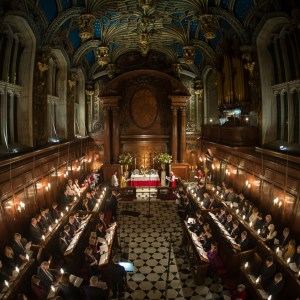 The Catholic Church and the Church of England put aside more than 450 years of history this week when two of their most senior clerics came together for the Catholic rite of vespers in Henry VIII’s Chapel Royal at Hampton Court Palace.

Cardinal Vincent Nichols was the main celebrant of the rite, sung mostly in Latin, and the Bishop of London, the Rt Revd Richard Chartres, gave the homily on the Virgin Mary.

The occasion formed part of the celebrations to mark the 500th anniversary of Hampton Court as well as being an historic event of reconciliation between the two denominations in the palace of the king responsible for England’s break with Rome.

The music at the Vespers service was sung by The Sixteen and included compositions by the Tudor composers Thomas Tallis, William Cornysh, and John Taverner. Tallis and Cornysh were members of the choir of the Chapel Royal, where Henry VIII worshipped with both Katherine of Aragon and Anne Boleyn.

Two years ago Cardinal Nichols and Bishop Chartres prayed together in the cell in the Tower of London where St Thomas More was imprisoned before execution after he refused to acknowledge the break with Rome. Last November, the preacher to the papal household, Fr Raniero Cantalamessa, preached at the Westminster Abbey service in front of The Queen to mark the opening of the Church of England’s General Synod.

The service was recorded by BBC Radio 3 to be broadcast in the Choral Evensong slot at 3.30pm on 30 March and repeated at 3pm on 3 April.