Francis appeals to Catholic institutions to take in Syrian refugees 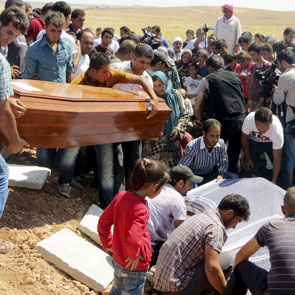 Pope Francis appealed to every parish and religious community in Europe to house at least one family of refugees.

Speaking at the Sunday Angelus in St Peter’s, the Pope urged a “concrete gesture” to be taken by the Church in face of a growing humanitarian crisis.

Helping refugees would, the Pope explained, be a way to prepare for the extraordinary jubilee year of mercy due to begin on 8 December.

He said: "I appeal to the parishes, the religious communities, the monasteries and sanctuaries of all Europe to take in one family of refugees,"

Francis added the Vatican’s two parishes will be welcoming migrants in the coming days.

The Pope went on: "I address myself to my brother bishops of Europe that in their dioceses they will support this appeal of mine, remembering that Mercy is the second name of Love,"

Tens of thousands of refugees, including many families, are coming to Europe fleeing parts of the Middle East and Africa with numbers reaching record levels.

Francis has made the plight of migrants a key element of his papacy: his first visit outside Rome as Pope was to Lampedusa, a small Italian island between Tunisia and Italy where many refugees arrive on makeshift boats.

He is also expected to raise the treatment of migrants to the United States when he visits the country later this month.

PICTURE (above): Relatives carry a coffin in Kobani, Syria, at the funeral for the two Syrian toddlers and their mother who drowned as they were trying to reach Greece (CNS)