'Bishop of bling' sued by his former diocese for €3.9m

The diocese of Limburg, whose former bishop resigned in 2013 after having spent more than €31m on redecorating the bishop’s residence, and who has often been dubbed the “Bishop of Bling”, plans to file a €3.9m claim for damages in a Vatican court against him.

The Limburg diocese is at the moment being administered by Manfred Grothe, formerly auxiliary Bishop of Paderborn, who was installed as Apostolic Administrator of Limburg by Pope Francis after the resignation of Bishop Franz-Peter Tebartz-van Elst.

The €3.9m represents the loss the diocese suffered after the €31.3m refurbishment works cost far more than its original €5.5m budget. 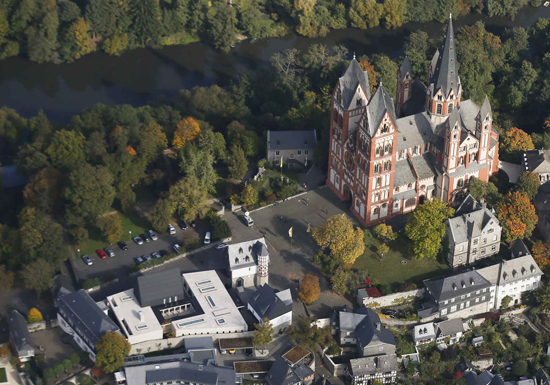 “Adminstrator Manfred Grothe, who was installed by the Pope, has already brought up our demands for financial compensation several times in the Vatican. It is now for the Pope to decide,” Stephan Schnelle, spokesman for the diocese, told the German Bild-Zeitung on 25 July.

As transitional administrator, Grothe was obliged to protect the diocese against damage and to recover debts, otherwise he himself would become liable, Mr Schnelle explained. At a recent meeting of the Limburg diocesan synodal council and the former priests’ council, many of the participants had urged Grothe to speed up the financial investigations procedure.

Tebartz-van Elst has a new job in the Vatican with the Congregation for the Evangelisation of Peoples. His present monthly income is €10,300. Of this, €7,296 are a pension which the Limburg diocese has to pay him.

A church trial will have to establish if Tebartz-van Elst alone can be held responsible for the sum claimed.

Above: Limburg cathedral and to the left, the renovated bishop's residence. Photo: CNS/Reuters