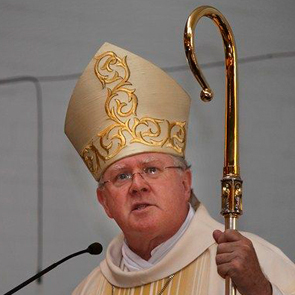 He listed 10 propositions "which are at times presented as self-evidently true but which are not" in an article published on the Australian Broadcasting Corporation's Religion and Ethics website.

Australia's House of Representatives and Senate voted down same-sex marriage legislation in 2012 but according to media reports a cross-party same-sex marriage bill will be introduced when federal parliament resumes next month.

On the argument that same-sex marriage was about civil rights, Archbishop Coleridge wrote: "Here the link is made to women’s rights and racial equality. But the law already offers ample protection to same-sex attracted people in a relationship in a way that was not true of women or people of other races in earlier times.

Referring to the proposition that "Humanity has got marriage wrong until recently,” he wrote: "Same-sex marriage ideology is a dramatic form of the Western myth of progress which the facts of history have never confirmed.

“It is a particular arrogance to claim that all cultures through millennia have been wrong on this fundamental point. Not that every society has got marriage right in every way. But societies have agreed that marriage is between a man and a woman. To disregard this time-tested, cross-cultural wisdom is to evoke Henry Ford’s unwise maxim, 'History is bunk'."

Archbishop Coleridge wrote that it was possible to oppose same-sex marriage – and the ideology which underpinned it – in ways that were respectful and open-minded. But he added that in an ideologically conditioned world, those who opposed same-sex marriage ideology were denigrated in an attempt to discredit or silence them.

"There is a violence in this, which is resistant to the truthful debate we need."

He wrote that truth surely counted for much when a society and its political leaders were making decisions about something as fundamentally important as marriage.

"That is why the ideology underpinning the push for same-sex marriage is an unreliable basis for a decision which is much more than political. This debate is about the meaning of marriage."