Panic has struck the organisers of the papal trip to Paraguay, which begins on Friday afternoon, as rain and thunder storms are forecast for all three days of the event. In Paraguayan culture people do not go out in the rain. In the countryside the dirt roads become impassable with mud, and in the capital, Asunción, where the Pope will arrive, the lack of drainage in the streets makes them dangerous as they turn into shallow lakes.

In the Ñu Guasu Park where the big open-air Mass will be held on Sunday morning, the ground could turn to slippery red mud which stains the clothes. What is more, the official instructions are that umbrellas may not be taken to the papal events, because they rob the people behind of a view. Wellington boots are recommended, as protection against the snakes that tend to come out in the rain, but few Paraguayans possess them, in a culture where rain means you stay at home.

The focal point of the Ñu Guasu Mass is a huge and very beautiful reredos made of maize cobs, seeds and cocos - the small, hard fruit of the Paraguayan palm tree, the cocotero. The maize shines with a particular yellow brilliance in the sun, and huge portraits of St Francis and St Ignatius, made entirely out of seeds, flank the huge blue, green and yellow central patterns with the Jesuit IHS motif.

For many weeks beforehand, the people of the city of San Ignacio, under the direction of artist Koki Ruiz, have been preparing the reredos, and thousands of people have signed their names on the cocos to make themselves present in a special way at the papal Mass. 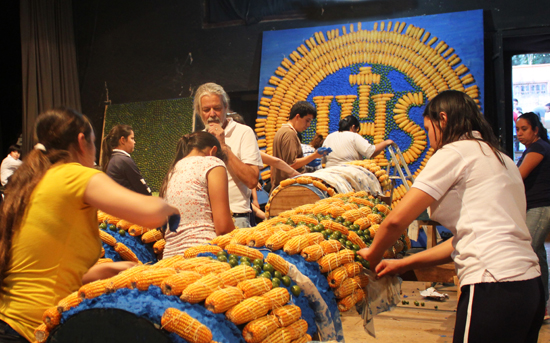 In an attempt to save the situation, Paraguayan Capuchin Br Mariosvaldo Florentino has urged the people to come out regardless of the weather. Only the sick should stay at home, he said, reminding them that in the previous papal visit, of John Paul II in 1988, when it also rained, the people who made history were not those who said “It was lovely – I saw it all on television”, but those who said “I was drenched to the bone, and I lost my shoes in Nu Guasu to see the Pope.”

The excitement in Paraguay about the forthcoming visit is unprecedented, so there is every hope that many people will follow the official advice, and even if only ten per cent were to turn up out of those who were planning to come, the crowds would still be enormous.
Paraguayans feel Francis is theirs in a special way, not only because he comes from a neighbouring country, but also because of his love of the poor and in particular for the Paraguayan woman, whom he has called “the most glorious”. He had in mind the way women rebuilt the nation after the 1864-70 Triple Alliance War against Argentina, Brazil and Uruguay.

In Buenos Aires, where Paraguayans form a subculture because of the huge numbers who go there to find work, the then-Cardinal Bergoglio always aligned himself in a special way with their poor barrio.
What the people of Paraguay will now be praying for most in this final day of preparation, is sun and fine weather.

Above: For weeks before the visit the workshop in San Ignacio was filled with a team sticking maize and coco fruits onto the giant reredos for the big papal Mass at Ñu Guasu. People were invited to sign their names on the tiny green coco fruits as offerings in the Mass. The creator of this artwork, artist Koki Ruiz (centre, bearded), supervised the work