The Archbishop of Canterbury Justin Welby on Tuesday expressed “deep concern” after the Episcopal Church in the US approved liturgies for marrying same-sex couples.

Their House of Bishops, meeting this week for the Episcopal General Convention in Salt Lake City, approved a marriage liturgy which includes a gender-neutral version of the current 1979 marriage service, and a version approved in 2012 for blessing same-sex unions that now also includes marriage vows. These rites do not refer to “man and woman” or “husband and wife,” but instead use “these persons” or “the couple”.

The new rites will be available alongside the existing marriage liturgy in the Prayer Book, which is unchanged.

The vote was passed with 129 in favour, 26 opposed and five abstaining.

Lambeth Palace issued a statement on Tuesday that warned the decision would have negative consequences for the Anglican Communion.

“While recognising the prerogative of The Episcopal Church to address issues appropriate to its own context, Archbishop Justin Welby said that its decision will cause distress for some and have ramifications for the Anglican Communion as a whole, as well as for its ecumenical and interfaith relationships,” the statement said, adding: "At a time of such suffering around the world, [the archbishop] stated that this was a moment for the Church to be looking outwards.” 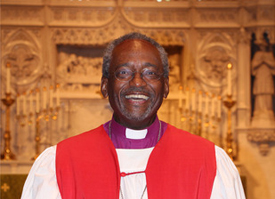 On 27 June the House of Bishops elected its first African-American leader, who will succeed Presiding Bishop Katharine Jefferts Schori.

Bishop Michael Curry of North Carolina was elected after winning 121 of 174 votes from bishops in the first ballot.

At a press conference Presiding Bishop-Elect Curry, 62, said his election as the Episcopal Church’s first black leader was "a sign of our Church growing more deeply in the Spirit of God and in the movement of God's Spirit in our world."

He said Friday’s decision by the US Supreme Court overturning state-level bans on same-sex marriage "affirmed the authenticity of love".

Photo above: Diocese of New Carolina