Vatican media 'must reallocate resources for the internet age'

Cardinal Vincent Nichols was installed this afternoon as chancellor of St Mary’s University, London, in an elaborate ceremony in Westminster Cathedral in which he said the institution would have roots that no secular institution could provide.

In a newly devised rite of installation drawn up by the university’s governors, the Catholic Education Service and the cathedral, the cardinal vowed to defend the university’s statutes and urge students and staff to serve society as servants of God. 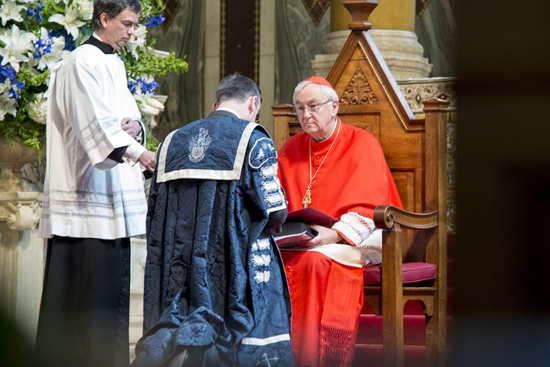 The university’s vice chancellor Francis Campbell then knelt before the cardinal and said the creed. He also pledged to “preserve communion with the Catholic Church” and maintain the observance of all ecclesiastical laws.

St Mary’s is one of five Catholic universities in England and Wales. It gained full university status in 2014.

In his homily the cardinal recalled Pope Benedict’s “remarkable” visit in 2010 to the Twickenham site, where he met Catholic pupils, Religious and leaders of different faiths.

He also mentioned his father, a teacher who studied at St Mary’s in the 1930s, who he said could not have imagined his son being installed as chancellor of the institution. He said his father would say, “Stop, that’s more than enough. Have you no sense of how long you should go on for?” The cardinal added: “Most priests don’t.”

In comments in the order of service, the cardinal spelt out his belief in Catholic education. “In the face of religious fundamentalism, aggressive secularism, moral relativism and what Pope Francis has called ‘the globalisation of indifference’ our world needs the charism of the Catholic university where faith and reason can meet in a dynamic and mutually respectful way, each purifying the other of any unwholesome attributes.”

Mr Campbell in his written comments referred to Blessed John Henry Newman’s “seminal invocation” that university training “aims at raising the intellectual tone of society, at cultivating the public mind, at purifying the national taste”.

At the start of the ceremony cathedral administrator Canon Christopher Tuckwell stressed the cathedral’s close relationship with St Mary’s, which he said stretched back to Cardinal Wiseman, the first archbishop of Westminster after the re-establishment of the hierarchy in England and Wales, on whose initiative it was founded.