Even a “broken” marriage remains a source of grace for those who are involved in it, Cardinal Vincent Nichols said at a special Mass celebrating the sacrament of matrimony which was attended by more than 500 couples marking milestone anniversaries in 2015.

Christ, said the cardinal in his homily, is actively present in every sacramental marriage; he is a partner in it, and he is always faithful. “So we have to grasp the challenging truth that even when the human relationships within a marriage degenerate and break down, something recognised in a civil divorce, there remains in that marriage the Word of Christ, given and never revoked,” he said. 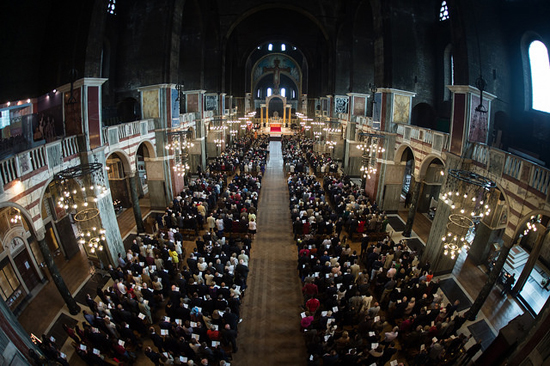 From this arises a demanding and painful question, the cardinal continued: what was the grace of marriage that remains for the spouse in such a situation? “Perhaps it is the grace of sorrow and repentance, the grace of being able to see and embrace the hurt done through that breakdown and the responsibilities that flow from it?” he said. “Perhaps that recognition is the first step on the pathway of mercy and of conversion.”

The cardinal was speaking four months ahead of the Synod on the Family in Rome, in which he will be taking part. There have been calls for the synod to relax the Church’s ban on divorced and remarried Catholics receiving Communion.

Also in his homily on Saturday, Cardinal Nichols mentioned that he had recently met the Queen. “Mention of her great granddaughter Princess Charlotte brought the most brilliant of smiles to the face of Her Majesty,” he said. Families were at the heart of the life of the Church, he said, and it was important to remember that neither marriage nor family was ever entirely private or self-contained. “At every phase of marriage and family life, help is often needed from the wider family or from the church community,” he said.