Philippines Cardinal Luis Antonio Tagle has been elected president of Caritas, the international confederation of more than 150 Catholic development agencies. 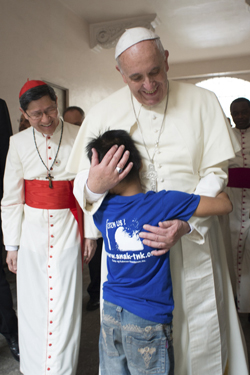 In January Tagle welcomed Pope Francis to the Philippines, where a record 6 million people attended the final Mass. Like Francis, he is admired for his warm personality and concern for the poor.

Voting was over swiftly on the third day of Caritas’ General Assembly in Rome. The other candidate was Maronite Archbishop Youssef Soueif of Cyprus.

Speakers at the 12-17 May assembly were to include Cardinal Peter Turkson, President of the Pontifical Council for Justice and Peace; economist Professor Jeffrey Sachs, Dr Jacques Diouf, the Food and Agriculture Organisation’s special envoy for the Sahel and the Horn of Africa; HIV expert Professor Beverley Haddad from the University of Kwazulu-Natal, and Peruvian theologian Fr Gustavo Gutierrez, known as the father of liberation theology. The invitation to Gutierrez will be seen as more evidence of a “progressive” sway at Caritas.

The network of 164 Catholic charities – who are to welcome Caritas South Sudan as the confederation's 165th member – was to focus on the theme, "One Human Family, Caring for Creation."

Citing Jesus' explanation of the final judgment in the Gospel of Matthew, which includes the line, "For I was hungry and you gave me food," the Pope said, "we must do what we can so that everyone has something to eat. But we must also remind the powerful of the earth that God will call them to judgement one day, and it will be seen if they truly tried to provide food for him in every person, and if they worked so that the environment would not be destroyed, but could produce this food."

The Pope stressed the need for Caritas, which has been criticised for not doing enough to promote an explicitly Christian message, to keep God central in all its work. "Whoever lives the mission of Caritas is not simply a charity worker," the Pope said, "but is a true witness of Christ.” He said the work of Caritas in parishes, dioceses, nations and across the globe draws its strength from love of God and neighbour. "Without this root, Caritas dies."

Caritas agencies work to reduce poverty through promoting development and advocating for justice and assisting refugees around the world. Pope Francis asked representatives at the Mass to be especially mindful of persecuted Christians – "our Christian brothers and sisters who have been violently deprived of food for the body and for the soul.”

Under Francis’ pontificate, Caritas and the Vatican seem to have found common ground. Caritas General Secretary Michel Roy said the “Francis effect” was visible at Caritas and had boosted the number of volunteers and contributions. Even poor countries such as those in the Balkans had donated generously to crises such as the Nepal earthquake, he said.

Above: Cardinal Tagle with Francis, seen during his visit to the Philippines embracing a former street child. CNS