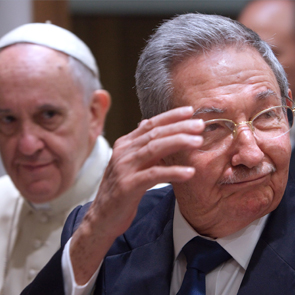 Ladies in White leader says Castro was mocking the Pope

Leaders of more than 20 international reform groups have written to Pope Francis criticising the trend towards “mega-parishes” as a response to the decline in priest numbers.

The letter is signed by 24 groups whose representatives attended last month’s reform conference in Limerick. It warns the Pope that bishops are responding to the priest shortage by creating “anonymous and unmanageable superstructures”.

In these new mega-parishes, personal contact between people and ministers is lost, says the letter, leaving the faithful “alienated, unsettled and insecure” as priests are increasingly focused on administration instead of caring for souls.

Calling for new models of ministry and the management of parish life, the signatories tell the Pope that there is opposition to parish mergers among a cross section of the faithful and that new paths to vibrant parishes are needed.

“Let us establish a new culture of co-responsibility and joint decision-making in all structures of our Church,” they write.

Elsewhere, the signatories, who include Fr Helmut Schüller, representatives of the Association of Catholic Priests in Ireland, Paul Collins of Catholics for Ministry in Australia and Deborah Rose-Milavec of FutureChurch in the United States, write: “Let us open the priestly office to everyone who has the charism. Let us develop new management models and forms of pastoral ministry so that parishioners can participate according to their charisms.”

One of the signatories, Fr Tony Flannery, said that while clustering in Ireland usually involved between four and five parishes, in France it could involve up to 10 with just one priest.

He said the weakness of the current model of parish councils lies in the fact that it is a consulting body while decision-making is still consigned to a small clerical group.

“We need real and meaningful responsibility for parish councils with the power of decision-making which would allow priests to be free to do the ministerial work,” the Redemptorist priest said.