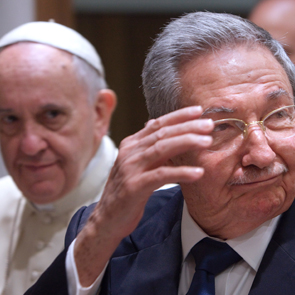 Francis to spend four days in Cuba en route to US

A member of the Catholic lesbian, gay, bisexual, and transgender community in London has claimed he was snubbed by Polish church leaders during a visit last month.

Martin Pendergast, from the Westminster diocese, said his invitation to meet Krakow diocese representatives to discuss LGBT pastoral care was suddenly withdrawn, despite Cardinal Vincent Nichols providing a letter of introduction to Cardinal Stanislaw Dziwisz, the Archbishop of Krakow.

Mr Pendergast said that although he knew that neither Cardinal Dziwisz nor his auxiliary, Bishop Grzegorz Rys, would be in Krakow at the time, it was agreed he would meet with diocesan officials. He said: “A range of excuses for cancellation was offered but successively contradicted – Cardinal Nichols' letter of introduction had not been received, nobody was available for such a meeting, and finally that I and my hosts had failed to arrive.”

Mr Pendergast was visiting Poland as part of a mentoring project run by the European Forum of LGBT Christian Groups, funded by the Dutch Government and hosted by the Polish LGBT group, Wiara i Tecza (WiT), which translates as “Faith and Rainbow”. During the visit he addressed a number of secular and religious LGBT groups and meetings.

He said: “In marked contrast, a fruitful and positive meeting was held with Mgr Tadeusz Sowe, Director of Pastoral Matters for the Warsaw archdiocese, and other officials." He said Mgr Sowe welcomed the discussion, saying it “opening new perspectives” on the pastoral care needs of LGBT Catholics, their parents and their families.

He added: “It wasn't my purpose to tell LGBT people in Poland, nor the Church, what they should do about pastoral care. Where there is a stand-off of one side against the other, real solutions can only emerge through an honest listening process. There is a need to move beyond seeing the other as a “problem” to be overcome. I think WiT has now been able to open doors through the experience of my visit, as well as identify their friends across a number of non-LGBT Catholic sectors in Poland.”