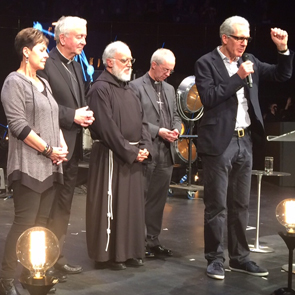 Religious freedom activists are calling on the US State Department to reverse its decision to deny a visa to an influential Iraqi Christian leader, Sr Diana Momeka, who planned to visit the US this spring to advocate for persecuted Christians in the Middle East.

“Sr Momeka is a gift to the world and a humanitarian whose work reminded me – when I met her in Iraq – of Mother Teresa,” said Johnnie Moore, author of Defying ISIS and a key partner with the 21 Martyrs Campaign, created following the beheadings by Islamic State (IS or ISIS) of 21 Coptic Christians in Libya earlier this year.

“It is incomprehensible to me that the State Department would not be inviting Momeka on an official visit to the US, as opposed to barring her from entry.”

Nina Shea of the Hudson Institute was also critical of the decision. In an online commentary, she wrote, “Earlier this week, we learned that every member of an Iraqi delegation of minority groups, including representatives of the Yazidi and Turkmen Shia religious communities, has been granted visas to come for official meetings in Washington – save one.

“The single delegate whose visitor visa was denied happens to be the group’s only Christian from Iraq.”

Sr Momeka was displaced from her home at the hands of IS. Some 50,000 other Christians from the Iraqi city of Qaraqosh were also forced to flee.

Meanwhile the Iraqi Government’s announcement of a fresh military initiative aimed at freeing the city of Mosul and Nineveh province from the jihadists of the Islamic State (IS), has received a guarded welcome from Christians. The Nineveh Plain was home to predominantly Christian towns and villages that emptied between June and August last year before an IS onslaught.

“Of course, many want to go back to their homes,” said Fr Paolo Thabit Mekko, a priest of Mosul currently displaced in Erbil. Despite many Christian refugees moving to Jordan and Lebanon or further afield, he says, “it is not true that everyone wants to flee and many dream of returning to their life as it was before”.

Meanwhile, in Syria, the population of the largest city in the northeastern province of Jazira is surrounded by IS jihadists. “We are going through a terrible moment,” Syrian Catholic Archbishop Jacques Behnan Hindo of Hassaké-Nisibi reported last weekend. “The jihadists attacked Hassaké for two days and were warded off by the army and Kurdish militias,” he said, “but we are cut off, like an island surrounded by jihadists on all sides.”

Meanwhile Maronite Patriarch Cardinal Bechara Rai told Unesco on a visit to Paris that the exodus of Christians from the Middle East was depriving the region of its peacemakers and would weaken the influence of the vast majority of moderate Muslims.

Christians were “irreplaceable artisans of peace and development” in the Middle East, he said, and their departure weakened those societies at a time when globalisation required diversity.

“The exodus of Christians from their countries of origin ... will also weaken the role of moderate Muslims who are by far the vast majority of Muslims in the Middle East,” he said.