Pope Francis has sparked renewed fears for his health after telling a group of parishioners that he is “a bit old and ill”.

The Pope asked a group of infirm and disabled people, gathered in the seaside town of Ostia near Rome, to pray for him, warning that he was also suffering from heath problems. 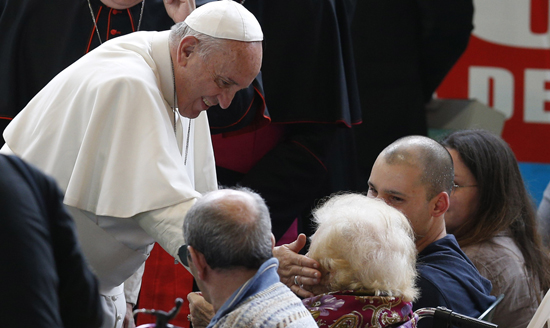 He said: “I thank God that in this community the old and the ill are cared for. When the old and ill are not looked after there something wrong with the community.”

Previously Francis has said that he might only have two or three years to live.

Concerns for his health surfaced last summer after he cancelled a series of engagements. Francis rises at 4.30 a.m. every day and has kept up a whirlwind of activity since his election more than a year ago. He has admitted that advisers have been nagging him to rest more.

He has some underlying health problems, including sciatica and had part of one of his lungs removed in his youth.

Some observers have claimed the Pope has gained weight since his election and is having difficulty breathing, which they say could be a sign of a heart condition. Earlier this year doctors reportedly advised him to cut back on his daily meal of pasta.

Above: Francis' visit to the parish church at Ostia. Photo: CNS/Paul Haring