Make poor people central to your prayer as Romero did, Nichols says 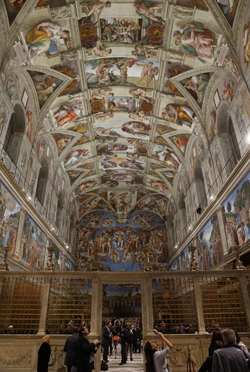 The papal almoner, an archbishop who distributes charitable aid from Pope Francis, has planned a special afternoon for about 150 homeless people: a walk through the Vatican Gardens, a visit to the Vatican Museums, private time in the Sistine Chapel and dinner in the museums' cafeteria.

L'Osservatore Romano, the Vatican newspaper, reported on Tuesday that the special visit was organised for this Thursday by Archbishop Konrad Krajewski, the same papal aide who came up with the idea of installing showers for homeless people near St Peter's Basilica and who recruited barbers and hairdressers to donate their services on Mondays.

"The artistic beauty of the Vatican can be admired also by the poor, who usually see just the steps of the colonnade" around St Peter's Square, the newspaper said.

For pilgrims and the homeless alike, the steps of the colonnade provide a place to rest out of the sun and rain.

The newspaper said Archbishop Krajewski's guests will be divided into three groups, each with a guide, and will enter the museums after a sightseeing stroll through the Vatican Gardens. The museums will close to the public 90 minutes early so that the special guests will have the final part of the tour – the Sistine Chapel – to themselves.

Guides will explain the art and architecture of the chapel and a short prayer service will be celebrated, the paper said. "The whole group will be accompanied to the cafeteria, where dinner will be served."

“Even in this we see a very beautiful gesture, which pleases Jesus,” the Pope said, after leading the crowds in reciting the Angelus: “those most in need are those who give us the word of God.”