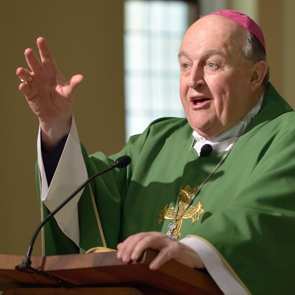 Senior Australian cleric charged with cover-up of abuse in 1970s

Poland's Catholic Church has suffered a defeat after President Bronislaw Komorowski ignored its complaints and signed legislation to approve an international convention combating violence against women.

"Far from being a hostage to some election calendar, this matter should be considered in line with the state's interests," President Komorowski told journalists. "Although legal checks are continuing, I see no incompatibility between this convention and our constitution. I think it will have a positive influence on Polish law in its mechanisms for protecting victims of violence.”

The president was speaking after signing a government bill that will permit the ratification of the 2011 Convention on preventing and combating violence against women and domestic violence.

Mr Komorowski said he had tried to avoid "political calculations" in his approach to the convention, which was signed by the Polish Government in 2012 and given final parliamentary approval in February, and hoped to consent to its ratification "without unnecessary delays".

The 81-article document has so far been signed by 37 of the Council of Europe's 47 member-states, but ratified and enforced by only 16, of which three – Germany, Malta and Serbia – have tabled official reservations. In a February statement, the Polish bishops’ conference said it reflected an "extreme, neo-Marxist ideology of gender", and sought to replace a social model linked to Christian tradition and culture with "a model of total liberty and self-realisation arising from a Leftist, secular culture". The bishops added that the convention said nothing about violence associated with media images, pornography, abortion, alcohol and drug abuse, and would add "no solutions at all to those already existing in Poland's law and social practice".

However, this was rejected by President Komorowski, who said complaints of "gender language" in the convention were a "simplification", adding that "Polish family dramas" were caused "not by language issues" but by a lack of methods for "combating evil, painful and shameful problems".

Poland's Catholic Church is also vigorously opposing a bill by the liberal government of Prime Minister Ewa Kopacz to allow in vitro fertilisation (IVF), which remains unregulated in the country. In an early March statement, the bishops’ conference said the draft law reflected "utilitarian motives" and treated embryonic human life "objectively and instrumentally". Four-fifths of Poles said they believed the Church should accept IVF in a March survey by the Warsaw-based CBOS agency.