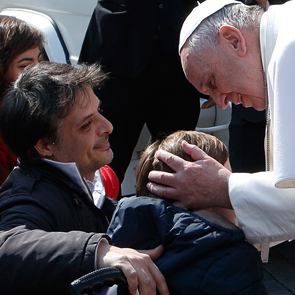 A leading anti-abuse campaigner has offered to lead the Vatican’s child protection commission in Rome.

Peter Saunders, the outgoing Chief Executive of the National Association for People Abused in Childhood (Napac), is already a member of the Pontifical Commission for the Protection of Minors and Vulnerable Adults.

But in an interview with The Tablet this week, Mr Saunders said he would like to see a beefed up commission office with an extended remit to deal directly with allegations of abuse.

Currently, the commission, which includes safeguarding experts from across the world, is staffed by just one priest, Fr Bob Oliver, and its next meeting is not due to take place until October.

Mr Saunders has said he would be willing to lead the commission office and work closely alongside fellow members including Baroness (Sheila) Hollins, professor of the psychiatry of learning disability at St George’s Hospital, London and Marie Collins, an Irish abuse survivor and campaigner.

He added that he would like to see the commission become “the FBI of the Church staffed by laity so that people can come to me an other members rather than referring them somewhere else.” He added that the “somewhere else” is the Congregation for the Doctrine of the Faith (CDF), which, Mr Saunders maintains, is “not up to the task.”

The campaigner, who is stepping down from his role at Napac to concentrate on his work for the church and membership of other committees, says that he has been inundated with messages from survivors who claim they are still ignored when they make complaints to Church leaders in their countries.

The vast majority of bishops’ conferences across the world have guidelines on how to respond to abuse allegations. In many cases the protocols require any allegation to be reported to the relevant civil authorities.

Responding to the proposal, the Survivors Network of Those Abused by Priests (Snap) commented: "We hope Vatican officials hire Pete Saunders to head an abuse office, but only if they're prepared to fully fund it and give him wide latitude. While we are unconvinced that the papal abuse panel on which he sits has much chance to make a difference, we support any move that decreases the role of clerics in dealing with clergy sex crimes and cover ups."

Mr Saunders, a Catholic, and his charity have risen to prominence due to its work with survivors abused by Jimmy Savile, the former BBC presenter found after his death to have been a serial sex offender.

Mr Saunders is expected to have a role in the Government’s inquiry into historic child sex abuse to be led by New Zealand judge, Dame Lowell Goddard.