Michelangelo theft was 'an inside job'

Burke condemns pro-reform voices at Synod on the Family 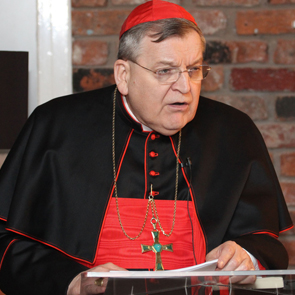 US Cardinal Raymond Burke has condemned church reformers who want to explore ways of admitting civilly remarried Catholics to Communion in a damning critique of October’s Synod of bishops on the Family.

The cardinal, whom Pope Francis moved from heading the Supreme Tribunal of the Apostolic Signatura to leading the Knights of Malta, is in England this week. In an hour-long address he criticised attempts to change church teaching on marriage and family life and said that last year’s Synod on the Family, called by Pope Francis, was “confused and erroneous” in that it sought to condone contraception, gay relationships and “living in a public state of adultery”.

He told a meeting on Friday in Chester, which was organised by the lay Catholic group Voice of the Family, that “confusion about the meaning of human sexuality” had led to breakdown of the family, corruption of children and “ultimately, self-destruction.”

During the address, which ran to 25 pages but did not mention Pope Francis, he called the report that was issued at the midpoint of the Synod, which advocated using more welcoming language around homosexuality, “a manifesto, a kind of incitement to a new approach to fundamental issues of human sexuality in the Church.”

He singled out a presentation given in February 2014 by Cardinal Walter Kasper, who urged the Church to show greater mercy when dealing with family issues, as the first instance where such “confusion and error” was expressed.

He concluded: “Even within the Church, there are those who would the truth of the indissolubility of marriage in the name of mercy, who condone the violation of the conjugal union by means of contraception in the name of pastoral understanding and who, in the name of tolerance, retain silence on the very integrity of marriage as a union of one man and one woman,” he said.

On Saturday he told the Society for the Protection of the Unborn Child (SPUC) at their youth conference in Southport that there was no such thing as “alternative sexualities”, only that enshrined by God.

On Sunday he celebrated Mass in New Brighton in Merseyside before visiting the Shrine of St Augustine in Ramsgate.