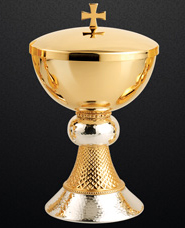 The bishop of Bellay-Ars diocese in the Rhone-Alpes region of France has ordered all churches to keep consecrated hosts in secure places rather than in tabernacles, because of a wave of thefts.

Bishop Pascal Roland told priests to leave tabernacles open to show they contain no valuable ciboria. Hosts could be left in the tabernacle if it is made of metal and securely locked, he said, or if enough believers are present to deter thieves.

His order came after five such thefts in the first week of February, the latest in a series of thefts of ciboria and defacement of churches in the diocese in recent months. In most cases, the consecrated hosts were simply dumped in the church, but some have also disappeared with the ciboria.

The increasingly common phenomenon of vandalism of French churches was highlighted in a report for the Parliamentary Assembly of the Council of Europe regarding religious intolerance, with a focus on the treatment of Christians. Last month the assembly passed a resolution urging member states to condemn and punish hate speech and crimes against Christians. The non-binding text passed with 67 votes for, two against and 15 abstentions.

The resolution said governments had overlooked “numerous acts of hostility, violence and vandalism recorded in recent years against Christians and their places of worship.” It urged member states to guarantee respect for religious rights, especially in the workplace and education, and ensure that counter-demonstrations do not limit Christians’ rights to protest peacefully.

It also asked the media to avoid negative stereotyping of Christians “in the same way as for any other group”.

The resolution did not mention specific examples of anti-Christian discrimination but the accompanying report on which it was based cited several instances, notably British cases where registrars were dismissed for opposing same-sex unions or marriages or employees disciplined for wearing religious symbols.

The report also mentioned vandalism of churches in Sweden and legal action taken against German Christians who home-schooled their children for religious reasons. In Ukraine, it said, Catholic and Protestant churches have increasingly come under attack in areas controlled by armed separatists.